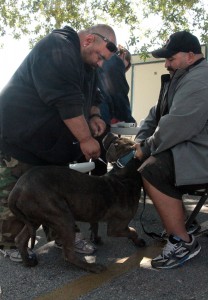 In 2007 the Tribe enacted an ordinance similar to the county and state’s, which requires pet owners to register their animals annually. The rabies and microchip clinics were held in Big Cypress, Brighton, Hollywood and Immokalee. The next clinic will be at Trail on May 2 behind the Miccosukee Preschool.

Education is an important service provided by Animal Control.

The program reinforces that animals stay on their owner’s property, so they don’t become a nuisance in the community. It also focuses on training pet owners to keep pets safe and healthy.

Other responsibilities include trapping feral animals and dealing with wildlife that can endanger people, including alligators, bears, panthers, coyotes and bobcats.

“We assess the animals and make sure they aren’t a threat,” Vazquez said. “We have to live with these animals; they’ve always lived here.”

Animals are usually captured and relocated elsewhere on the reservation unless they have lost their fear of humans. In that case, animals like alligators are given to Okalee Village or Billie Swamp Safari. Animal Control works with the state to tag and collar bears and panthers for relocation.

Raccoons can be a nuisance if they find a regular food source, including garbage cans.

“They are part of nature and the ecosystem,” Vazquez said. “Once they find a food source, they stay. We educate the public on how to secure their garbage.”