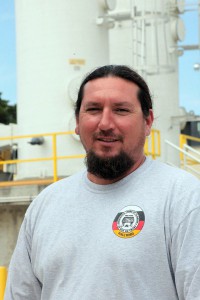 BRIGHTON — Earning a state license to qualify for a job in the Public Works Department can be a challenge; rigorous licensing exams test student knowledge of specific and technical information. Recently, Public Works Quality Assurance coordinator Craig Gopher became the first Tribal member to earn a Water Distribution System Operator License, which qualifies him to work in the Water Plant as a Distributions and Collections technician.

To prepare for the licensing exam, the Tribe allowed interested employees to take a class. About 15 employees took the four-day course, followed by a 115-question test. Those who passed the test then took the state exam; Gopher, as well as a few others, earned his license.

“It makes me feel good inside,” said Gopher, 42. “You are never too old to accomplish things.”

Gopher has worked with the Public Works Department for about three years – with the last 18 months in the Water Plant. And he will keep pushing forward; he is working to earn a water and wastewater licenses so he can advance to become a water plant operator. He has about six months of book work to complete before he can take the licensing exams. He figures the process could take up to a year.

After serving 1991-95 in the Army, Gopher attended technical school to become an auto body technician. Instead of going into that field, he went to work for the Tribe, which he had done on and off since he was 15 years old.

“Maybe I’ll set a good example for other Tribal members to do something,” he said. “It’s not a hard job, but it’s a job that can take you a long way. You don’t need college when you have a license.”

Gopher lives in Okeechobee with his wife, Denise, and children Zachary, 13, and Shyla, 11. He recently was hired to work in Hollywood. Because he believes the educational opportunities are better in South Broward, he plans to move the family south.

“This is a moment of pride for our department because very few people working for the various cities and counties throughout the state have accomplished this feat,” said Michael Judson, Water Compliance specialist.