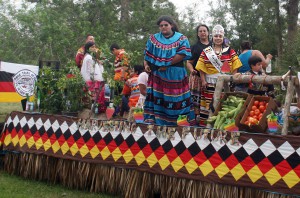 IMMOKALEE — The Seminole Tribe won first place in the float competition at the Immokalee Harvest Festival Parade for the third consecutive year.

The 53rd annual event was held on April 13. As in previous years, the Seminole Tribe played a recurring role.

This year, the Culture Department created a traditional Seminole campsite that included a chickee, garden and bountiful harvest of fruits and vegetables on its float.

“We chose a theme of harvesting the future,” said Immokalee Culture Coordinator Geraldine Osceola. “We believe that we belong to the earth and that it is our responsibility to protect and care for it just as it provides for our existence. The populations of the world need to concentrate their efforts and put their knowledge to work to ensure that we can maintain clean air, water and a healthy food supply to sustain future generations.”

“Our Seminole ancestors were the first people to harvest crops in the Everglades region that eventually became Immokalee, and they continue to be a part of the agricultural chain today,” Osceola said. “Their farming techniques varied dramatically from today’s methods but the final goal was the same. Crops are planted, nourished and harvested as a food source and everyone looks forward to a successful harvest.”

Miss Florida Seminole Alexis Aguilar exercised her role as ambassador as she waved to the crowd of spectators lining the parade route.