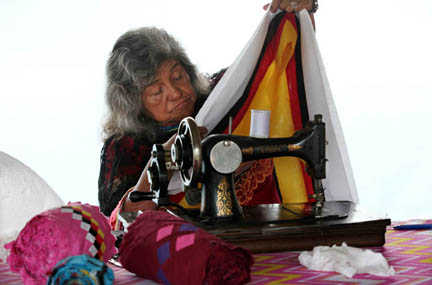 “That’s what I love the most about Chalo Nitka. It’s always been a day everyone puts on patchwork,” said Lewis Gopher, Brighton Reservation’s cultural events specialist, who also served on the festival committee.

City and county royalty from tots to teens waved from floats in a colorful array of patchwork dresses, shirts and jackets. City and county officials and department heads, business leaders and educators from many ethnic backgrounds also wore Seminole fashions that further created a sea of streaming color.

Spectators, many also clad in patchwork, lined the sidewalks and cheered for the cavalcade led by Mingo Jones, of Hollywood Reservation, who rode on horseback in Seminole warrior regalia. The 2015 grand marshals, Joe and Annie Espinosa, were escorted just behind Jones.

Chalo Nitka, which means “day of the big bass” in Creek, was first held in 1949 to celebrate the asphalt paving of the pathway formerly called Main Street.

In those days, the festival coincided with the Tribe’s earliest efforts to promote cultural tourism. Then, the parade led to an open field, now Chalo Nitka Park, where Seminoles created Native artworks, cooked sofkee and frybread on a campfire and performed alligator wrestling. Billy Bowlegs’ turkey calling technique was a sure hit.

At the end of the festival, after the winners of the weeklong bass fishing contests were announced, the fish were distributed to Seminole families to take home and eat.

But those were the days when the Seminole were poor and dependent on culture-based economy, according to historians. About seven years ago, in the advent of gaming and other business ventures, the Tribe became one of the festival’s top sponsors.

The parade and festival, held on the first Saturday of every March, bring the most Seminole participation.

Retired firefighter Ernest Collingsworth, a 10th generation Floridian who has attended Chalo Nitka since childhood, donned a summer patchwork jacket that was handed down through his family. Because it lacks rickrack trim, the jacket could date to the early 1930s. His wife, Marilyn Collingsworth, a sergeant at Hendry County Sheriff’s Department, received her more contemporary Seminole jacket from her mother about a decade ago – it contains several rows of rickrack.

Former Glades County property appraiser Larry Luckey and his wife, Neva Luckey, have attended the festival for the past 30 years. Neva Luckey said she loves the “novelty and the artistry” of patchwork clothing. But the couple only dons Seminole attire once a year.

“I’ve had this Seminole jacket for 25 years and wore it exactly 25 days,” said Larry Luckey, pointing to the light blue jacket that was gifted to him in 1990 by the Moore Haven Women’s Garden Club. “That’s how many Chalo Nitka events this jacket has been to and that’s how special it is.”