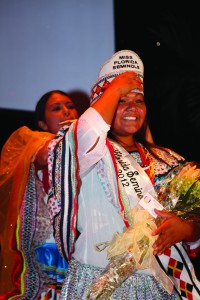 Many girls wonder what it’s like being a Seminole Princess, but Jewel Buck doesn’t have to guess.

She became Miss Florida Seminole in July 2011, and it’s been a great experience for her. Jewel traveled to many places and met many new people.

“[Being Miss Florida Seminole] has opened a lot of new doors for me,” Jewel said.

One of the opportunities she had as Princess was traveling to Albuquerque, N.M. for the Miss Indian World Pageant, during which Jewel competed against 26 young women. Jewel said she made a lot of close friends during the three-day competition.

When she wasn’t out making appearances, Jewel still kept her crown in plain sight at home.

“When I first got the crown…I set it on top of my TV and watched the crown instead of the TV,” said the 20-year-old with a smile.

Jewel started competing in pageants by running in Brighton’s Princess Pageant in 2003. Three years later and after much perseverance, she won her first crown.

She said preparing for the talent portion and practicing public speaking were keys to her success. While her talents varied from pageant to pageant, she said she especially enjoyed singing and demonstrating her culture.

In fact, Jewel sang a Christian song in Creek at the Miss Florida Seminole Pageant, helping her secure the crown. She said not only did she have to be confident in her talent, but she also had to shake off her nerves, which she used prayer to do.

While she enjoyed wearing the crown during the past year, the time commitment forced her to give up a few things. For example, Jewel was redshirted for her first year of sports at Haskell Indian Nations University in Lawrence, Kan. However, she said it was worth it.

All in all, being Miss Seminole was a powerful experience for her, and she hopes she inspired other young girls in the Tribe.

As she passed down the crown on July 28, Jewel wished this year’s Princesses the best of luck.

Her advice is this: “You must love the Tribe, have fun and be yourself.”