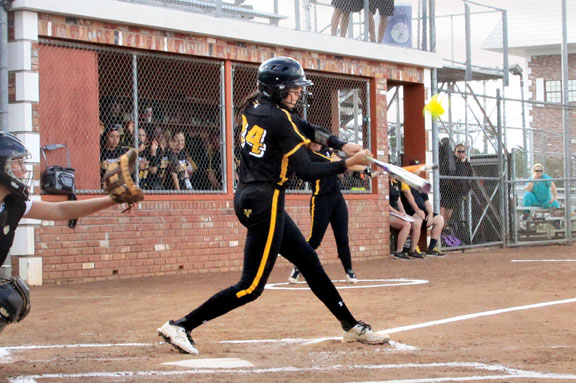 PLANTATION — Transitions don’t go much smoother than the shift made by Ahnie Jumper, whose ascension from the bench to behind the plate has been a key factor this season for the state powerhouse American Heritage School softball team.

After spending two-plus seasons as a substitute on the varsity squad, Jumper began her first year as a starter with a base hit in the team’s season opener Feb. 10 against Archbishop McCarthy. For the next seven weeks, the hits kept coming from the Big Cypress sophomore who generated a 15-game hitting streak for the six-time state champions.

“Ahnie is doing great,” said Heritage coach Marty Cooper. “Last season she was more of a fill-in as a support role player, but now she is a starter and she’s an impact player. She’s grown as a player and grown physically. She’s gotten stronger and faster.”

Evidence of Jumper’s improved power and quickness can be found in the field and at the plate. During a 6-2 win April 9 against Wellington, a low pitch brushed the dirt and scooted out of the batter’s box to Jumper’s left. A base runner at first base appeared to have ample time to safely advance, but Jumper quickly retrieved the ball and rifled a bullet to second to nab the runner. Later in the game, Jumper stood her ground in a play at the plate and tagged out a runner.

Offensively, Jumper has been among the most productive hitters all season. Batting anywhere between the 3 and 6 spots, she reached mid-April in the top five on the team in hits, runs, RBIs and doubles while compiling a batting average that hovered around .400. Six times she’s registered multiple hit games, including a 3-for-3 night with two RBIs against Lely in March.

Although this year’s squad can be deemed young with just three seniors, Heritage still rolled past a majority of opponents during the regular season in lopsided fashion. The Patriots won nine regular season games by seven or more runs, but a blowout wasn’t part of the scenario March 31. In one of Broward County’s most anticipated regular season games, Jumper delivered an RBI single in the Patriots’ 2-1 win against rival and fellow defending state champs St. Thomas Aquinas on Heritage’s senior night.

When catcher Lauren Newmark graduated last year after another state championship drive, a void needed to be filled. Jumper and senior D’Kota Cassady have shared those duties this season. When Jumper doesn’t catch, she plays in the outfield. Since Cassady is in her final year, Cooper expects Jumper’s role as catcher to increase next season.

The victory against Wellington marked Jumper’s third consecutive game catching in as many days, so it came as no surprise she sought the trainer and a large bag of ice afterward. From the reservation to Plantation, being a catcher has been a big part of Jumper’s softball career, which began at age 8.

“I started out with the Little Seminoles for my dad with the rez, and I’ve been catching ever since,” said the daughter of Josh and Andrea Jumper.

Ahnie Jumper first suited up for Heritage’s softball program as a seventh-grader on the JV team. Now she’s cherishing her role as an everyday varsity player for a squad that annually graduates players to the college ranks. Players from last year’s senior class are playing this season at Penn State, Florida International, Bowling Green and Nova Southeastern.

“It’s intense, and a lot of pressure, especially as a catcher,” Jumper said.

After compiling a record of 19 wins, 1 loss and 1 tie in the regular season, Heritage – which has been ranked among the nation’s top 25 teams in polls – turned its focus to the playoffs with hopes of retaining the Class 5A state crown it captured in remarkable fashion a year ago when the Patriots erased an eight-run deficit to overcome Belleview in the title game. Jumper didn’t play in the championship game, but she learned from it.

“Never give up. We were down by a lot,” said Jumper, who isn’t the only member of her family to make an impact at Heritage. Her brothers Andre and Blevyns helped the football team win a state title last fall.

Heritage softball has also received a boost this season from two other Seminoles: Kiauna Martin and Analyse Jimenez. Martin, a speedy freshman, has started some games, but a knee injury forced her to the sidelines. She returned to the lineup just in time for the playoffs.

“She’s very fast, very quick on the bases,” Cooper said. “She’s what you call a slapper bunter, and she puts the ball in play and it’s very difficult to get her out. She’s very tough to throw out as a stealer, too. She can steal a lot of bases.”

Martin, an outfielder, notched a pair of hits and drove in a run Feb. 24 in a 7-2 win against Westminster Christian.

Jimenez, a seventh-grade JV player, received a promotion to varsity late in the regular season. She went 1-for-1 with an RBI and scored a run in a 16-0 win against Cardinal Gibbons in the 5A-District 16 semifinals April 13.

Cooper, who has guided Heritage to 12 consecutive trips to the state playoffs, said he’s always enjoyed coaching players from the Tribe, ranging from this year’s crop to former players such as Kristen Billie and Chelsea Mountain, daughters of Esther Gopher and John Billie Jr..

“It’s a nice group of kids,” Cooper said. “They’re all good kids, which is nice. Somebody is doing a good job.”