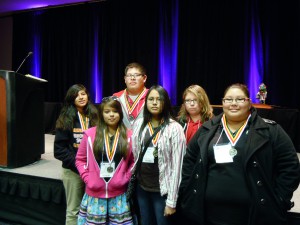 The first day, students set up their projects and worked diligently to pass a rigorous safety and violations check with the guidance of Ahfachkee teacher Vicky Rudolph. Once completed, students were welcomed at an opening ceremony on Thursday evening that featured keynote speaker Everett Chavez, a longtime American Indian Science and Engineering Society (AISES) member and the current superintendent of Santa Fe Indian School.

On the second day, students remained by their projects as three regular judges and a number of special awards judges interviewed them. That evening, students enjoyed the annual AISES dance and relaxed from their day of interviews.

The third day concluded the event with an awards ceremony that was streamed live on the AISES website, allowing even more parents to watch their children receive awards.

Grand award winners at the NAISEF level are invited to move on to the International INTEL Science Fair held each May in California. The students are currently working toward qualifying and hope to attend.

Chaperoned by Vicky Rudolph and Valerie Whiteside, the students were also able to weave in visits to several sights in Albuquerque, including dinner and shopping in Old Town, visiting the University of New Mexico, eating lunch along Route 66/Central Avenue, touring the National Museum of Nuclear Science and History, riding the Sandia Tram to Sandia Peak and, for some, seeing snow for the first time.