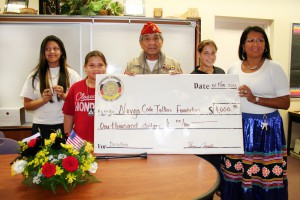 BRIGHTON — The Seminole Tribe strongly advocates the learning of their Native languages through family and Tribal programs. The Tribe also maintains language by educating youth through their school system.

On Nov. 1, Pemayetv Emahakv Charter School (PECS) received a special visit from Peter MacDonald Sr., a four-term Chairman of the Navajo Nation, a former Marine and a member of the legendary Navajo Code Talkers. MacDonald was in the area for the Tribe’s Veterans Day celebration and stopped in to talk to youth about his experiences as a Code Talker during World War II and the value of maintaining Native languages.

“I’ve been wanting one of the Code Talkers to come to our school because of how important the story was and how Native language was used in something as big as a war,” Thomas said. “I hope it would inspire our kids to see the importance of learning our language.”

While speaking to students, MacDonald emphasized the value of learning Native languages whether it is Navajo or Seminole. He also spoke about the uniqueness of the languages.

“It (Native language) means more than just knowing what the words are for different things,” he said. “It cuts into your future, your ability to maintain your culture and your sovereign status.”

MacDonald also gave a few examples of the Navajo code words that were used during the war and how they were translated. When a Code Talker received a code, what he heard was a series of unrelated Navajo words. The message contained Native terms associated with military terms, as well as Native terms representing letters of the alphabet because the Navajo’s language is not written, MacDonald said.

At the conclusion of MacDonald’s visit, Thomas and PECS students presented a $1,000-dollar check to the Code Talker’s Foundation on behalf of Pemayetv Emahakv Charter School to show their appreciation for his visit and his service.