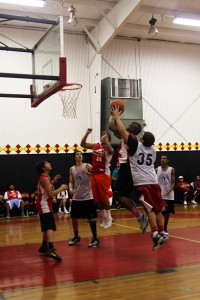 HOLLYWOOD — To kick off the school year and encourage friendly competition among reservations, the Recreation Department held a Tribalwide Back-to-School Youth Basketball Tournament on Oct. 6.

About 85 kids from Immokalee, Trail, Brighton, Big Cypress and Hollywood participated in the event, which took place at the Hollywood Gym. Six teams registered for the high school division, two for the girls’ division and two for the middle school division. Youth 10 and younger also had the opportunity to play in exhibition games during the day-long event.

“This was the first Tribalwide tournament of the year, and we plan on having more throughout the year,” Tribalwide Recreation director Richard Blakenship said. “The idea is to expose the Tribal members to each other in an effort to increase the quality of play.”

“Everybody needs to see each other and play each other,” Recreation aide and event organizer Ashley Wilcox said about hosting a Tribalwide event for players off the reservation as well. “We like to keep them going and encourage others to play.”

In the girls’ division, Trail’s Young Bloods faced Hollywood’s ABC in a best-of-three matchup. The Young Bloods proved victorious with a close 30-28 win in game three. In the middle school division, the Rez Boyz took on the co-ed Team Brighton. The Rez Boyz won the division in two games with a score of 25-15 in game two.

Philip Jones, a member of the winning Brighton team, said he enjoyed playing in the tournament.
“It was good to get back on the court and play with my teammates from Brighton,” he said. “They showed good effort.”

The tournament was just one of the Recreation Department’s ways of keeping youth active. They created baseball and softball leagues as well, all in an effort to teach youth discipline and problem-solving skills, keep them fit and show them how to play on a team.

With the excellent turnout at the tournament, Wilcox said they will organize more tournaments throughout the year; a youth Thanksgiving tournament is planned for Nov. 3.