Skip to content
You are here
Home > Sports > After hiatus, PECS baseball returns to diamond 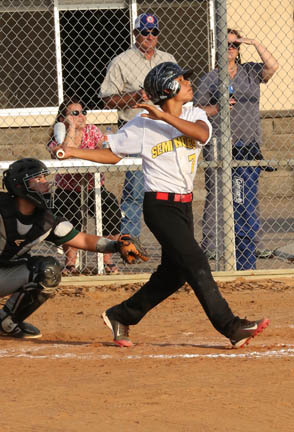 BRIGHTON — The 2015 baseball season is bound to be special for Harry Tewksbury.

The Pemayetv Emahakv baseball coach said he’s excited that the Charter School’s team is back in business after a year’s absence. This season also marks the end of the collegiate careers of his twin sons, Adam, a catcher at Troy University in Alabama, and Cameron, a pitcher for Valdosta State University in Georgia.

“It’s been a part of my life and their lives as we’ve come along. I just love the game,” said Tewksbury, whose cousin Bob Tewksbury was a Major League pitcher for six teams.

PECS opened its season against Glades Day School’s junior varsity March 5 in Brighton. Not surprisingly, the Glades team filled with ninth- and 10th-graders had its way against the smaller PECS squad whose white jerseys and black pants were occupied by mostly sixth- and seventh-graders. The outcome – Glades Day won 16-3 – wasn’t a huge concern for coach Tewksbury. His main objective is to see improvements from the season’s first pitch to its final out.

“We want to win every game we get in, of course, but if we can make them better than they were at the end of this thing, that’s really what we want to get to,” said Tewksbury, whose assistant coach is Kevin Jackson.

A year ago, PECS was unable to gather enough players to field a team. This season 11 players – nine starters and two substitutes – comprise the squad that is scheduled to play at least six games.

“The group of guys we have are very coachable; they listen, they hustle, they do everything you ask them to do, which, to me, is more important sometimes than having a guy that can do everything but doesn’t want to listen to you,” Tewksbury said.

Scheduling games against kids their own age isn’t as easy as it used to be.

“We have to get JV games because there’s not a lot of middle school baseball,” said Tewksbury, whose team used to face middle schools on the east coast. “Those middle school teams on the coast, it’s very handy for them to just play each other, and they don’t have the budget to travel over here, so they kind of cut us out of their little deal.”

Jagger Gaucin served as a substitute. Myron Billie, who is expected to be among the team’s top pitchers along with Lucas and Silas, was unable to attend the opener.

It didn’t take long for an example of players heeding their coach’s advice to pay off. Lucas and Tanner combined on a perfect pickoff play to nab a runner at third base in the top of the first inning.

In the bottom of the first, Silas scored on Dante’s infield single to knot the score at 1-1.

Glades Day eventually built a big lead, but PECS generated a few more highlights. In the third inning, Kamani had a single. Dante belted a two-run single that brought home Silas and Kaleb in the fourth.

Tewksbury said a handful of his players want to play high school baseball after middle school, which makes their years on the regulation-sized field at PECS so vital. The distances at Ollie Jones Memorial Park between the mound and home plate – 60 feet, 6 inches – and between the bases – 90 feet – are the same as high school.

“When they get there, it won’t be such a shock to them. They’ll already have a feel for this field and it won’t be so intimidating,” Tewksbury said.

This year’s edition features just two eighth-graders, so a few growing pains might be expected as players adjust to bigger fields, larger opponents and heavier bats.

“We’re awful young,” Tewksbury said. “We have a lot of seventh-graders and three or four sixth-graders sprinkled in there.”

The current crop only has to look about 30 miles northeast to see how former PECS students are faring in high school. Okeechobee High School’s varsity squad has received key contributions this season from a handful of alums, including Elijah Finney, Sean Osceola, Zeke Matthews and Layton Thomas.