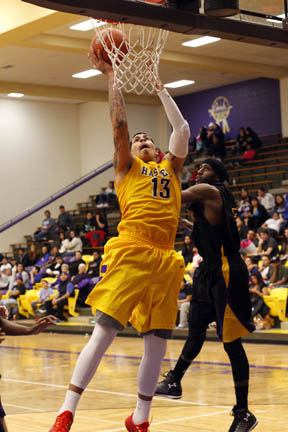 LAWRENCE, Kan. — From a basketball standpoint, Duelle Gore produced a decent freshman season at Haskell Indian Nations University in 2010-11. With about seven points and seven rebounds per game, his averages were fine for a rookie, but away from the court the kid who grew up on the Hollywood and Brighton Reservations struggled with the rest of college life, so much so that his next game in a Haskell uniform wouldn’t come until four years later.

Gore’s return this academic year – first to the classroom at Haskell and then to the team – made a believer out of his coach.

“I can’t say enough about his determination,” said Haskell coach Chad Kills Crow, whose first year at the Lawrence, Kansas college for Native Americans came in Gore’s freshman year. Kills Crow recalled Gore being underprepared for college. “He came to Haskell and did well as a freshman, but he wasn’t college-ready; he wasn’t socially prepared.”

There was no sophomore basketball season for Gore, whose woes in the classroom made him ineligible to remain with the team.

“He quit going to class. I was disappointed with him,” said Kills Crow, who thought he might never see Gore again after offering two suggestions. “My advice to Duelle was, ‘You need to get your grades up and you need to mature.’ To be honest, I didn’t think he was going to do it.”

At first, those instincts appeared to be correct. Gore left Haskell, but he remained in Lawrence on a hiatus that turned out to be a game-changer. Left without a school or a team, Gore continued working out. He wanted to come back.

“It made me miss the game, and I decided I needed to finish school,” he said.

First, however, he needed to get back into Haskell, which meant his grades needed to improve. He enrolled at Johnson County Community College near Kansas City and continued knocking on Haskell’s door.

“Each semester, he kept applying to Haskell, but his GPA wasn’t high enough,” Kills Crow said.

“I worked so hard for that,” Gore said.

“To my surprise, he busted his tail and got his GPA up,” Kills Crow said.

Gore’s eligibility to return to the team started in mid-season. His debut in January featured no signs of rust as the 2010 Okeechobee High School graduate promptly drained 21 points in a 94-87 win against College of the Ozarks. Three weeks later, he netted a season-high 28 points against Iowa’s Waldorf College.

“I was getting open shots and everything was clicking for us,” said Gore, a 6-foot-5, 220-pound guard who also recorded a double-double with 18 points and 12 rebounds in a win against York College in late January.

In 14 games, Gore scored in double digits 10 times on his way to averaging 13.2 points, third highest on the team. He was second in rebounds with 7.2 per game.

Described as “an impact player” by his coach, Gore sparked the team, which plays in the NAIA. Haskell had a 2-14 record before Gore’s arrival but won three out of the first four games with him.

“He turned our season around. He got here and we started winning,” Kills Crow said. “He’s got the skills to play inside and play outside. He’s developed a great jump shot.”

Haskell’s season ended with a conference playoff loss to Waldorf. Gore scored 15 points and was the go-to guy for a last-second desperation shot with Haskell down by three points.

“During the timeout, I told (coach) that I wanted to take the shot,” Gore said.

Gore took the shot, but unfortunately for Haskell, which finished with an 8-23 record, a low ceiling in an opponent’s small gym proved to be a sixth defender. Gore’s shot from around midcourt never reached its planned destination because it hit a light fixture.

“I thought it had a chance,” Gore said.

After finishing the winter semester, Gore remained in a learning mode when he arrived home in Hollywood just in time to attend the Miami Heat’s game March 16 against LeBron James and the Cleveland Cavaliers.

“I pay attention to what they do to get open, and how they get open running off screens,” Gore said the day after he watched Dwayne Wade score 32 points in the Heat’s victory. The mental notes 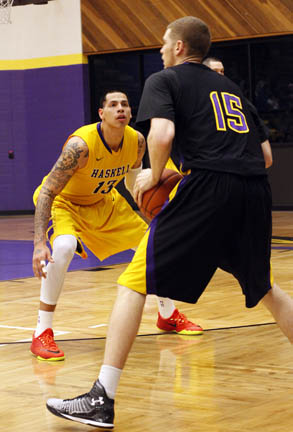 Gore absorbed about Wade’s performance could come in handy as he practices during the offseason.

“I like his post-up game. I want to work on my post moves versus smaller guards,” Gore said.

Gore, who is in Haskell’s American Indian Studies program, said he expects to graduate in slightly more than a year and might pursue a future degree in business.

“I’ve enjoyed it,” he said about his time at Haskell.

During the offseason, Gore said he’ll continue to rehab an injured ankle that he played with for most of the season. He might work out with a teammate this summer in Los Angeles, but he doesn’t have to venture far to find sharpshooters for practice. His brother Trewston Pierce and sister Shae Pierce led their high school teams in scoring this season.

“They deserve it. They worked hard for it,” Gore said.

“He’ll be a force to be reckoned with next year,” said Kills Crow, who described Gore as a “potential All-American.”

The bottom line, as the coach noted, is that Gore is on the right path.