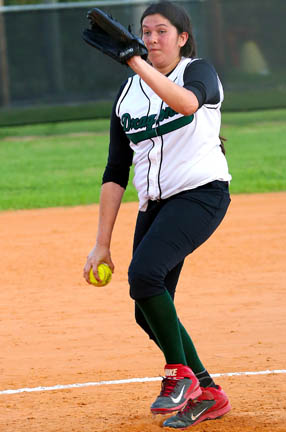 LAKE PLACID — Hand slaps and the muttering of “good game” are the typical, often unenthusiastic exchanges between softball teams at the conclusion of games. Opponents usually don’t offer hugs, but that’s what Camryn Thomas received from her ex-teammates.

After playing three seasons for PECS, Camryn shifted to Lake Placid this academic year to begin her high school career. The freshman right-hander from the Brighton Reservation has settled into her role as the team’s primary starting pitcher. About halfway through the season, she had already posted complete game wins against Sebring and Frostproof.

“Camryn has been doing an awesome job for us. She has a good, positive attitude,” said Lake Placid JV coach Todd W. Moore.

When PECS came up to bat in the top of the first inning, Camryn wasn’t in the pitcher’s circle, but she just about circled the playing field handling first base, third base and right field before being summoned for late-inning relief.

“My goal was not to use her today (as a pitcher) because that’s a lot of pressure on a kid; she’s a ninth-grader and having to pitch against her old school and her friends,” Moore said.

When Lake Placid fell behind 10-2 in the fifth inning, Camryn was brought in to pitch. In three innings, she struck out seven of her former teammates and allowed two hits and one earned run. As Camryn kept PECS’ bats quiet, Lake Placid’s offense sprung to life with four runs in the fifth and four in the seventh before its rally was halted with the tying run stranded at second base.

“It was exciting, but towards the beginning we weren’t doing so well,” Camryn said. “I kind of got down a little bit because I really wanted to beat them. We starting coming together as a team and we did good towards the end.”

Hitting the strike zone has been one of her strengths this season.

Batting in the No. 3 spot, Camryn drove in one run with an RBI infield single in the fifth.

On the other side, PECS hurdled adversity to boost its record to 5-3. Before taking the field, PECS was already without Haylie Huff because of an injury and another player who couldn’t play because she was tardy for school.

During the game, two more players were lost to injuries and another departed for 4-H duties.

The injury bug bit in the third inning when PECS third baseman Krysta Burton collided with catcher Jacee Jumper while both were chasing a foul ball.

Krysta was helped off the field by coaches and attended to by Seminole Tribe Fire Rescue.

Late in the game, Luzana Venzor was hurt in a collision with a Lake Placid runner at first base and left the game.

Jenna Brown and Alaina Sweat were hit by pitches in what turned into a black-and-blue victory for the kids in the red and black uniforms.

Despite the dents, PECS generated plenty of highlights. Its defense turned three double plays, Jacee made a tough catch against the fence in foul territory and center fielder Jenna and shortstop Janessa Nunez turned difficult plays into routine-looking outs.

PECS pitcher Aleina Micco tossed a complete game and helped her own cause with a remarkable day at the plate in the cleanup spot.

Aleina hit the ball hard every trip as she went 5-for-5 with a double, triple and five RBIs.

She provided critical insurance with a two-run single in the fifth that gave PECS a 12-2 lead, a cushion which became less comfortable as Lake Placid mounted its late comeback.

Alaina ignited PECS’ offense with an opposite field RBI triple in the third that brought home Janessa with the game’s first run.

“We’ve been hitting. It saves us,” Jimmie said.

The teams will meet again April 9 on the Brighton Reservation for PECS’ eighth-grade parent night.