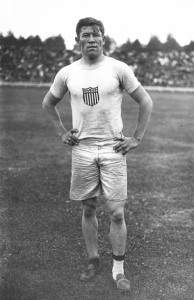 PHILADELPHIA — A play staged at Penn Museum at the University of Pennsylvania in Philadelphia Feb. 12 hit at the heart of an ongoing struggle throughout Indian Country to repatriate ancestral remains.

“Everyone but us had a right to be buried with family. Everyone but us,” said John Echohawk, executive director of the Native American Rights Fund, during a panel discussion after the play “My Father’s Bones.”

Written by Native American writer Mary Kathryn Nagle (Cherokee) and Harjo (Cheyenne and Hodulgee Muscogee), the play chronicles the plight of the sons of Olympic legend Jim Thorpe to bury their father’s remains in his homeland cemetery.

Thorpe, a member of the Sac and Fox Nation in Oklahoma who grew up on the reservation and later became known as the greatest athlete of the 20th century, passed away March 23, 1953 without a will. His then non-Indian third wife, Patsy Thorpe, interrupted Thorpe’s burial ceremony with a police escort and removed his body for delivery to a Pennsylvania town which, through a business contract and payment of “a few thousand dollars,” said Harjo, the town was renamed the Borough of Jim Thorpe.

Echohawk said Thorpe’s case brings a famous name to a 500-year-old problem. Native American and Alaska Natives remains and sacred objects have been robbed from graves, or battlefields, and then displayed for centuries as mere curiosities. Many human remains were sent to universities or repositories for scientific anthropologic study. Harjo called the practices “outrageous.”

“It’s ghastly that anyone or sacred thing would be a roadside attraction,” Harjo said. “In the 1960s, returning Vietnam vets called our dead relatives ‘prisoners of war’ in museums, schools and as attractions. This became a pretty massive rescue mission. For centuries, there were more dead Natives in repositories than living Native Americans.”

Thorpe’s sons, Jack, Bill and Richard, fought unsuccessfully for years for the return of their father. In early 2014, the sons won their case based on the 1990 Native American Graves Protection and Repatriation Act (NAGPRA), only to lose the case on appeal in October 2014.

“We were not looked at as people. This and many cases show the effect on families and on all the people,” Massey said. “What does it take for a son to bring his father home?”

Meanwhile, the Seminole Tribe and Penn Museum are at the final stages through NAGPRA of bringing home Native warriors who were taken from a battlefield near Okeechobee in the immediate aftermath of a Seminole War clash with the U.S. Army that left many dead. The effort, led by the Tribe’s Tribal Historic Preservation Office (THPO) Officer Paul Backhouse, is just the “tip of the iceberg.”

NAGPRA requires that federal agencies and museums, including university depositories, must consult with Tribes to attempt repatriation of remains. Forms of repatriation can include return for burial on sacred ground or longtime and specialized care at the depository. Secondly, the act provides for protection of burial sites and consultations with Tribes when and wherever archeological findings are, or could be, present.

To date, the University of Pennsylvania has disbursed 3,000 notifications to Tribes throughout Indian Country and has received 47 repatriation claims – the remains of 232 ancestors have been returned to families and Tribes. Additionally, the museum is exhibiting “Native American Voices: The People – Here and Now,” featuring hundreds of items from Tribes nationwide. Eighty Native American consultants contributed to the exhibit with Harjo in the lead of a four-person Native American advisory team.

Prior to the play from Feb. 9-12 at the United South and Eastern Tribes (USET) Impact Week Meeting 2015 in Washington, D.C., Backhouse and others from the Tribe’s THPO attended several sessions and meetings concerning the careful treatment – or no treatment at all – of culturally sensitive sites.

A Western Carolina University presentation on the use of cadaver dogs at suspected burial grounds on lands designated for development prompted heated response from several attendees.

“If you know our burials are there, then you should not be there, period,” said Edith Andrews, a repatriation officer of the Wampanoag Tribe of Gay Head in Massachusetts.

Andrews blasted the speaker for softening the truth – developers find bones, turn them over to universities or museums and then Tribes are forced to recover their ancestors through an act of Congress.

“Our people would not have to be reburied if they were just left alone,” Andrews said. “I can understand progress but what you call ‘rehabilitation land’ is destroying sacred burial ground.”

During a meeting Feb. 11 with Seminole THPO and administrators of NAGPRA at the Department of the Interior in Washington, D.C., NAGPRA’s David Tarler, head of training, civil enforcement and regulations, suggested that scientific anthropologists should learn that “the days of the vanishing original American is over.”

In late 2014, the Sac and Fox Nation, Thorpe’s remaining sons Bill and Richard, the National Congress of American Indians (NCAI) and former Colorado Sen. Ben Nighthorse Campbell (Cheyenne) filed a petition to reopen the case, but on Feb. 4, 2015 the 3rd District Court of Appeals refused to reconsider the return of Jim Thorpe to his homeland.

“We are still in shock,” said Principal Chief Thurman.

The next step will likely be to petition the U.S. Supreme Court, but Thurman and Echohawk agree that education must continue so that non-Native lawmakers can understand the problem. Echohawk said Native American cases lose 90 percent of the time, largely because of cultural differences.

“There are no Tribes within the 3rd District Court so judges are not used to dealing with us or the laws put in place for us. We just can’t give up,” Echohawk said.