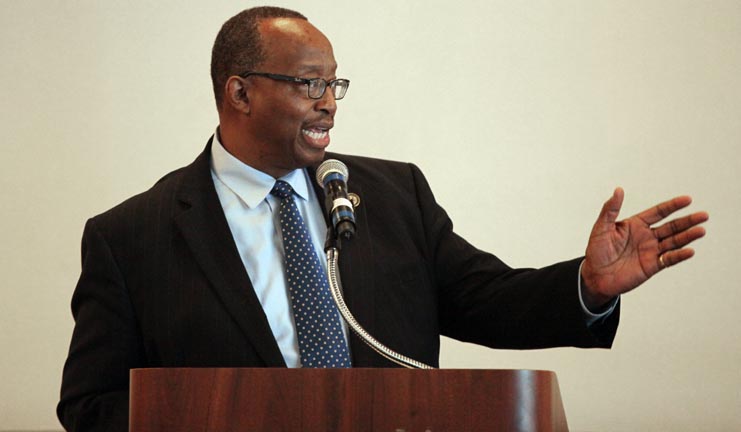 FORT LAUDERDALE — Native American children are two and a half times more likely to commit suicide –  the No. 1 cause of death among Indian youth – than children of other races, and they are three times more probable to suffer post-traumatic stress disorder than soldiers returning from war.

“You have to ask  yourself, what kind of despair takes hold of a community for this to happen?” said Brian Cladoosby, president of the National Congress of American Indians and Chairman of the Swinomish Indian Tribal Community.

The answers were hard to tell and hear for more than 50 of Indian Country’s strongest leaders, educators, social workers, legal advisers and others who convened April 16-17 in Fort Lauderdale for the third advisory committee hearing to Attorney General Eric Holder’s Task Force on American Indian and Alaska Native Children Exposed to Violence.

The task force, established in 2012, was born out of a 2009 U.S. Department of Justice (DOJ) report that revealed “alarming statistics about the safety and well-being of our nation’s children,” according to a recent press release. The study concluded that 60 percent of the nation’s children suffered from some sort of physical, sexual or other criminal abuse either firsthand or as a witness. Forty percent were exposed twice or more and 5 percent had endured violence 10 or more times.

Though the report utilized input from only a handful of  Native American children, common knowledge in Indian Country indicated that the numbers could spike to alarming proportion in some Tribal communities.

“But, it makes my heart glad that we are all willing to take a step back and see the truth. We need our partners at federal, state and local levels to work with us to find courses of action,” said Cladoosby, who sat on one of five hard-hitting panels that offered testimony, comments and solutions to five interrelated issues.

The panel topics included an overview of violence in Tribal communities; the Indian Child Welfare Act and keeping children connected to the community;  gangs and sex trafficking in rural and urban communities; Tribal school violence; and actions against violence that are already showing promise in several communities.

Many speakers first stated clearly that the problem is rooted in history. English colonization, genocide, federal Indian policies, internment on reservations, manipulated religious conversion, boarding schools where culture and language were forbidden are leading precursors to the escalation of violence.

“It’s a crying shame. The English displaced and abused us. We came to treaties with a pipe. The federal government came with a Bible, placed their hand on the Bible and promised to treat us with respect. I wonder when they will do that,” said Cyril Scott, President of the Rosebud Sioux Tribe in South Dakota.

Lack of education and extreme unemployment further fuel the problem.

“Poverty is a way of life in too many communities,” said Erma Vizenor, Chairwoman of the White Earth Nation in Minnesota. The 20,000-member Tribe, one of the poorest in the United States, was the first to team with federal prosecutors to share jurisdiction of crimes including murder, rape and felony child abuse.

“Why, in a culture where women and children are considered sacred, should such crimes ever be,” Vizenor said. “Children who grow up with threats, with drugs and alcohol abuse, have negative thoughts. They blame themselves when they say, ‘If I were good enough, I wouldn’t get beat.’”

Gang activity was described by gang and sex trafficking panelist Chris Cuestas, of the National Violence Prevention Resource Center, as a “sleeping giant” in Tribal lands. Not just groups of thugs, he said,  but organized cells of individuals who develop criminal enterprises – such as sex trafficking.

In North Dakota, where the oil boom has attracted thousands of non-Natives and Tribes have become divided over money and land, 19 cases of child sex trafficking are in various stages of adjudication. To cope, many of the children have turned to heroin and methamphetamine.

“There is organized crime in the Bakken oil fields,” said Sadie Young Bird, director of the Fort Berthold Coalition Against Violence. “But it was not on our radar, so we had to go in blind to fight back and we did.”

Young Bird and another advocate opened the domestic and sex abuse center three years ago with 14 clients. Today, the case load is quadrupled.

The advisory committee, also made up primarily of Native Americans, listened to panelists and asked for specific recommendations to improve conditions. Most witnesses said more money to fund education, social services and anti-crime efforts would surely help.

Co-chair Joanne Shenandoah, a performance artist of the Haudenosaunee Six Nations Iroquois Confederacy, said the task force came out of 56 recommendations for action that would expand educations, improve judicial training and establish the advisory committee. When the advisory committee was created, four public meetings were set.

The first public hearing was held in Bismarck, N.D. and focused on violence in the home. The second hearing in Scottsdale, Ariz. honed in on the juvenile justice response to violence. The next hearing will follow the National Congress of American Indians Mid-Year Conference June 11-12 in Anchorage, Alaska, and will bring to light violence specific to Alaskan Indians.

Already, the DOJ has awarded approximately 1,000 grant awards worth nearly $440 million during the past four years to enhance prosecution, training and outreach efforts to keep Tribal communities safe, said Robert Listenbee, administrator for the DOJ’s Office of Juvenile Justice and Delinquency Prevention and co-chair of the task force.

“We must work together, nation to nation. It won’t be easy but  we are not looking for easy answers. We are looking for sustainable answers,”  Listenbee said.