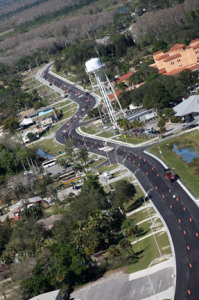 Actually, the occasion heralded 2.25 miles of a wider and safer Josie Billie Highway, the stretch of the road that cuts through the heart of Big Cypress Reservation to the community’s northern border.

“(Improvements) have been sorely needed, but to paraphrase Robert Frost, we have miles to go before we sleep,” Rep. Frank said.

Approximately 16 more miles of road is still left to address, Rep. Frank said, on one the most dangerous roads in Florida. The three-part project begins just north of Interstate 75 where Snake Road gets its name. For miles, the serpentine road flanked by a canal and drainage ditches squiggles through 33 of 34 curves that are deemed unsafe for the 45 mph speed zone.

So far, the roadway from about 1,000 feet north of the Big Cypress rodeo to just a few yards south of the Big Cypress RV Park has been finished. The completed section, funded largely by a $3.7 million TIGER III grant from the United States Department of Transportation (DOT), includes two 14-foot travel lanes in each direction, a paved 16-foot median, a 5-foot sidewalk on the east side and a 12-foot multiuse path on the west side.

TIGER is an acronym for Transportation Investment Generating Economic Recovery. Since 2009, Congress has dedicated $4.1 billion to help finance transportation projects that are exceptionally challenging, multi-jurisdictional and not eligible for ordinary DOT funding.

According to the Tribe’s 2011 grant application, Snake Road from I-75 through Big Cypress is deadly “based on crash data and tremendous concern by both the Miccosukee Tribe and Seminole Tribe.”

Along the Big Cypress Reservation stretch alone, from January 1997 to July 2001, 74 vehicle accidents were reported that left 46 injured and six dead. From February 2004 through November 2010, 129 crashes with 46 injuries and two fatalities were reported.

“We’ve been going 30 to 40 years here with so many deaths to Tribal members and others,” said Big Cypress Councilman Mondo Tiger. “If we only had guardrails lives would have been saved.”

Navigating the 10-foot narrow and nearly shoulderless lanes with no guard rails and little grading was considered dangerous enough in 1991 that on the insistence of the Seminole Tribe, the Bureau of Indian Affairs (BIA) conducted a study to detail conditions, propose changes and find funding, according to the Department of the Interior’s (DOI) website.

In 2002, the first formal meeting of local, state and federal officials included representatives of the Seminole and Miccosukee Tribes, Federal Highway Administration, BIA, Florida Department of Transportation and Hendry and Broward counties, for what the DOI called “an effective partnership.”

From the meeting and subsequent funding applications, came $1.1 million to get the project started.

He said he was startled, however, when he drove into Big Cypress on the night of Jan. 29 to find Josie Billie Highway lit with streetlights for the first time.

“I had to blink because I didn’t believe I was in Big Cypress. We don’t want it too bright, but we do want to be able to keep our eyes on kids riding ATVs. The lights help a lot,” Cypress said.

Johnna Blackhair, acting eastern regional director of the BIA, said the Tribe is the first in Indian Country to apply for and win a TIGER grant. Like Rep. Frank, Blackhair called the project “a milestone.”

“The TIGER grant is very competitive; it’s a huge deal and a unique statement that the Seminole Tribe met all of the qualifications. It’s huge to be able to engage all of the resources and be successful,” Blackhair said.

Councilman Tiger, who studied building and road construction at the University of Oklahoma, pushed the project through problems he predicted because he knows the trade, the land and the community. The job took 18 months to complete.

For Councilman Tiger, who recalls stories told by elders about the old days when the road was a “mud hole from here to [State Road] 80,” getting the entire stretch of Snake Road reworked cannot happen fast enough.

“I’ll be glad when the whole road is widened with turning lanes and guard rails. We’re not asking a whole lot. We’ve been taxpayers for a long time. We just want to be safe,” he said.