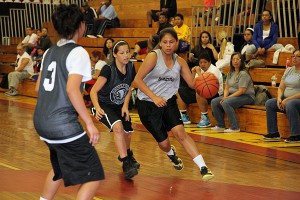 HOLLYWOOD — Basketball-loving youth came from all reservations to compete in the Youth Basketball Tournament from Feb. 1-2 at the Hollywood Gym. Boys and girls on 17 teams competed in the 10 and under, middle school and high school categories.

“It’s basketball season and we just wanted to do something for the kids,” said Ashley Wilcox, Hollywood Recreation aide.

The double-elimination tournament gave the losing teams a chance to get back into the competition.
Younger teams played late into the night on Friday, while high school girls’ and boys’ teams played all day Saturday; the boys’ final ended at nearly 1 a.m.