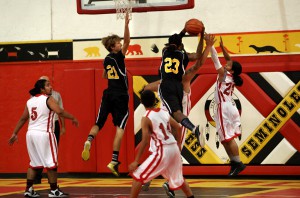 BIG CYPRESS — The regular season for Ahfachkee School varsity basketball teams wrapped up without a championship title but with pride in knowing that every battle fought on the court was honorable.

“Sometimes you can’t measure a win by the score on the board,” said Ahfachkee’s athletic program director Danielle Jumper-Frye. “You have to measure by the goals you accomplished.”

The girls averaged 34.5 points per game and 39 rebounds per game to end the season with a record of 5-10 for the season and 2-4 for the conference. Though the team lost 64-42 in round one of the district tournament to Southwest Florida Christian Academy, the score was improved over the first two games against Southwest.

Next year, the team will return with all but one player, senior Danni Jae Tommie, who will graduate.
“With her most impressive statistic of 14.1 rebounds per game, we will be sad to see her go,” Jumper-Frye said.

All eyes will be on Dasani Cypress, Malari Baker, Kaylan Osceola and Caitlin Cypress. Dasani was the most improved this year with 8.5 points, four rebounds and three steals per game. The girls will continue to develop skills and mature.

“(Dasani) was phenomenal for a middle schooler playing at the varsity level,” Jumper-Frye said.
The boys’ coach, Cicero Osceola, said his team’s first winless season can be chalked up to the learning curve. With two eighth-graders and three sixth-graders, some who had never played the game, the focus for players had to be learning the game and becoming confident in their strengths.

Osceola said the boys never lacked determination. Proof came during the most memorable game against Donahue Academy when Ahfachkee Warrior Romeo Garcia tied the game with only 26 seconds left on the clock. At the very last second, Donahue slammed the ball into the basket, some say after the buzzer went off.

“No one ever complained,” Osceola said. “We played every game hard and we never backed off. Next year, we will be more mature, stronger players from the start of the season.”

Only one player, the team’s only senior, Tylor Tigertail, will not be returning next year. Eleventh-grader Quenton Cypress, strong in defense, hustling and diving for loose balls, will take over Tigertail’s leadership role.

“Romeo, when he decides what he wants to do, will be a real good player…Les will be something not to be messed with … Issiah is going to hurt a lot of teams,” Osceola said.

“The other teams better expect the unexpected,” Osceola said.