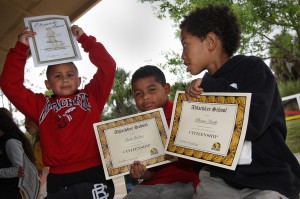 But there was no athletic game on the morning of Jan. 31. It was the school’s Second Quarter Awards celebration for children who are winners in the classroom.

“Sports get so much attention. Today, we’re switching it up and letting everyone know that academics is something to cheer about,” principal Lucy Dafoe said. “It’s time to celebrate.”

Children dressed in jackets, boots, hats and scarves for the winter-wonderland-themed event.

White lights that glowed like icicles hung from the gymnasium ceiling to create a wintry canopy.

Interspersed through announcements for high GPAs, attendance, citizenship and other achievements, the children played funny winter games like “build the snowman” and “sled race.”

Dafoe said the students’ accomplishments were worth the hoopla.

“We’ve done so much in the last quarter to celebrate,” she said.

Senior Tylor Tigertail was accepted to The Citadel, The Military College of South Carolina and senior RickyJoe Alumbaugh was accepted to Johnson & Wales University in North Miami.

Fifty students achieved GPAs of 3.0 or higher, 12 students had perfect attendance and 136 of the school’s 170 students received Citizenship awards for not being called – not once – to the principal’s office.

For Dafoe, the biggest achievement so far this school year continues to be senior class attendance.

At this time last year, seniors were attending only about 74 percent of the time. Attendance this year is skyrocketed to more than 91 percent.

After the award announcements, the celebration continued at an outdoor winter carnival that included hot chocolate, flavored snowballs, cotton candy and popcorn (of course following lunch) at the Mitchell Cypress Fitness Trail.