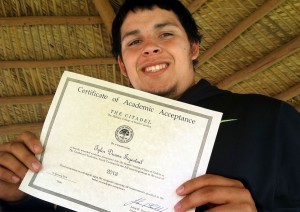 BIG CYPRESS — Tylor Tigertail said he was told too many times to count that he would not amount to much. The Ahfachkee School senior is proving those people wrong.

“To anyone who said I was not smart enough or tough enough to be among the few, the proud, the elite Marines, I persevered and now I am going to have my dream,” Tigertail, 18, said.

Halfway through his last year of high school, the young man, who is a self-described former class goof and most likely to get into trouble, was accepted to the No. 1 ranked public university in the southern United States: The Citadel, The Military College of South Carolina, in Charleston.

The institute, established in 1842, is ranked fifth among all public and private universities in the South, according to the 2012 U.S. News & World Report’s Best Colleges listing.

Tigertail, who carries a 3.8 GPA and is captain of the school’s Ahfachkee Warriors basketball team, said he dreamed of being a Marine for as long as he can remember. When he graduates in 2016, Tigertail will be a Second Lieutenant.

“I’m good at arguing and fighting but for a noble cause,” he said. “I’m also smart and athletic so why not be a Marine.”

Tigertail is no stranger to service. He was a unit commander in the Junior Reserve Officer Training Corps at Tahlequah High School in Tahlequah, Okla., served as a volunteer with the Boys & Girls Club in Big Cypress and is a member of the Ahfachkee School Student Council. He played the drums in Grandview Elementary School and Tahlequah High School’s marching bands and is teaching himself to play the trumpet.

“I think I should at least learn reveille and taps,” he said.

Tigertail said he was mostly influenced by the woman who raised him – his adoptive grandmother Betty Tigertail, who said her grandson’s independence and curiosity to learn new things has always amazed her.

“He was in preschool when I saw it first,” Betty Tigertail said. “He walked right up to the computer and started writing on it. I said right there, ‘This boy has what it takes.’”

She said her grandson always seemed to have smaller and younger children following at his heels.

“I’d tell him to act right and grown up because the little kids looked up to him,” she said.

Tylor Tigertail did the right thing in the end, though the temptation to quit school and party is still at every turn. Several times he almost gave in to peer pressure.

“No matter what, I always wanted to do more with my life. That’s what being ‘Unconquered’ means to me,” he said.

Betty Tigertail was fearful when her grandson told her that he wanted to be a Marine, but she put worries aside. He will be the first in the family to serve in the military.

“I want him to keep pushing forward with whatever dreams he has,” she said. “I know he will come back a man and do something very, very good in the world.”

For Tylor Tigertail, the future is filled with possibility.

After graduating from The Citadel, he will likely volunteer as an infantry officer, “in the trenches,” leading troops by example.

Later, he hopes to start a career with the FBI or CIA.

Even becoming Police Chief of the Seminole Police Department or Chairman of the Tribe is doable.

“Basically, I want to protect and serve,” he said. “I want to help those who can’t help themselves.”