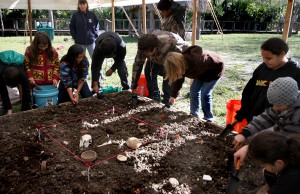 “We get to learn a little of what our ancestors did and how they did it,” said Sage Motlow, 12. “We’re archeologists for a day.”

About 60 fourth- through sixth-graders from PECS and a handful from Ahfachkee School spent Jan. 18 with their hands in the dirt and their minds on the study of human society.

Using mesh screen sifters, and with assistance from staff members of the Tribal Historic Preservation Office (THPO) on the Big Cypress Reservation, the children found pre-planted beads, pottery, shells, sharpened stones and other items from a cordoned site topped with turtle shells and deer bones.

But first, the students prepared for the archeological adventure at a show-and-tell lecture about mental mapping.

“You have to perceive your area by drawing it out before you work. It tells, basically, where you are in space,” said Juan Cancel, chief data analyst for THPO.

Cancel showed a map of South Florida drawn by a Native American in the early 1800s – likely around the time of the Second Seminole War. Then, the United States government and European interests depended on mapping by those who could envision and draw the terrain best, in this case, an early Seminole.

Children revolved through stations on the Museum site.

Under the shade of a chickee, they learned from Community Outreach specialist Willie Johns, who lived 19 years in a Brighton chickee village, that the structures were created by Seminoles who took refuge in the Everglades during the Seminole Wars. Then, and with some families still, adult sisters lived communally with their husbands and children using several chickees within the camp for sleeping, cooking and socializing.

“Our beds were on platforms to keep our bedding and clothes dry,” Johns said. “There was a pond nearby full of fresh water that we dove into first thing every day to wash. And when we’d get back to camp, a fire would be ready. Those were the rough days. Now we have it made.”

Archaeology Day also included a class in compass reading taught by archaeology field technicians Matthew Fenno and Geoffrey Wasson. Children used compasses to walk the Museum’s mile-long boardwalk and to chart a map of the grounds.

In the Clan Pavilion, the Museum’s Traditional Arts and Outreach coordinator Pedro Zepeda and Community Outreach specialist Van Samuels described the differences and similarities of Tribal, cultural and archeological sites.

“Even archeologists are not allowed to excavate certain areas because of the historical value and significance,” Zepeda said.

Back at the dig site, dubbed Osceola’s Sand Castle, the students described the environment, soil conditions and excavated artifacts. They measured their findings, noted colors and shapes, then concluded what purpose the items served in daily life.

“I never thought that beads could reveal so much about a culture or that a shard of pottery could be used to determine its original size and shape,” she said.

For Eecho Billie, 11, the most fun part of the event was digging for artifacts but the “coolest” part of the day was learning about the Seminole map maker.

“To think that an Indian drew Florida perfect just by using his mind tells me that we were always great thinkers,” Billie said. “I’d like to teach my own children that someday.”