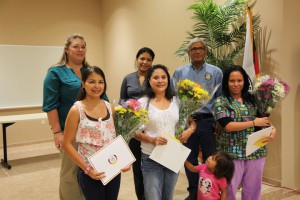 IMMOKALEE — For three years, Immokalee resident Lorraine Posada woke up at 4 a.m. and made a two-hour drive to the Art Institute of Fort Lauderdale in quest of her associate of science in patisserie and baking.

Her hard work and dedication paid off, as she – as well as three other Tribal members – graduated from vocational school this year.

Posada, a member of the Wind Clan, decided to return to school in an attempt to accomplish something academically after marrying her husband, Mario, and giving birth to three children. Although she graduated from high school in New Mexico and began college studying accounting, Posada said the career choice wasn’t the right fit and, therefore, never graduated.

She decided to return to school for baking, not only because she enjoyed it, but also for personal reasons; Posada had gestational diabetes while pregnant and found herself searching for healthier, lower-sugar recipes.

“I wanted to be serious about it,” Posada said about her decision to attend the Art Institute. “I wanted a degree. I wanted to build a foundation for baking.”

She attended classes every day as a part-time student and now uses the skills she learned at the Immokalee Senior Center. She bakes breads, as well as reduced-sugar and regular desserts, tweaking the recipes she learned to create her own unique concoctions.

“Once I was done, I wanted to give back to the Tribe,” she said. “Without the Tribe, I wouldn’t have been able to go back to school.”

Immokalee resident Megan Otero also graduated from vocational school with a certificate of completion in practical nursing from the Immokalee Technical Center, while Cassandra Jimmie graduated from Le Cordon Bleu College of Cullinary Arts in Orlando with an associate of science in culinary arts. The women worked hard to reach their goals and will now put their knowledge to use in the professional world.

For Jimmie, she always had a passion for cooking. While at restaurants she said she loved to observe how different chefs prepared food in their own ways. It inspired her to attend culinary school.

She said it took discipline, but she saw her hard work pay off when she walked across the stage in April to receive her diploma. She was the first in her family to graduate college. And although she currently works in the Council Office in Big Cypress, Jimmie said she will still use her culinary knowledge in the future and cook for her friends and family.

“I knew cooking would be my passion and my hobby, but I’ve always known I wanted to represent my Tribe,” she said. “I couldn’t pass up the opportunity to work in the Council Office at such a young age.”

Jimmie hopes to one day run for Tribal office in Immokalee and also go back to school for physical therapy and business.
The Immokalee community presented the women with special awards during the July 31 community meeting for their hard work and accomplishments.

In addition, Tampa resident Phaydra Clark graduated with an associate of science in patisserie and baking from Le Cordon Bleu Orlando in May.

Once the 20-year-old completed high school, she began contemplating her next move and analyzing her attributes.
“I was always artistic, but I didn’t know what to do with it,” Clark said.

One phone call from Le Cordon Bleu changed that. Interested in what they had to offer, Clark toured their facility and saw their ornately decorated cakes on display. She knew what she wanted to pursue: cake decorating.

Clark spent two years honing her craft and also learned “a lit bit of everything” else, including working with sugar and chocolate, cooking entrees and even taking hospitality classes.

She puts her knowledge and skills to work at Sweetie’s Delights Bakery in Orlando, where she creates fondant figurines and learns new cake decorating techniques from seasoned bakers.

“Do what you want to do because the only person stopping you is yourself,” she said in encouragement of Tribal members contemplating returning to school.

Adult Vocational administrator Marie Dufour-Bonville also encourages other Tribal members to go back to school and follow in these women’s footsteps. She said vocational schools offer students flexibility and education in specialized crafts.

“It can be a great stepping stone into higher education,” she said.

As far as Posada, Otero, Jimmie and Clark are concerned, Dufour-Bonville said the Education Department recognizes how hard they’ve worked and how much they’ve sacrificed to stand where they are today.

“The Education Department is very, very proud of the accomplishments of the vocational school graduates,” she said.