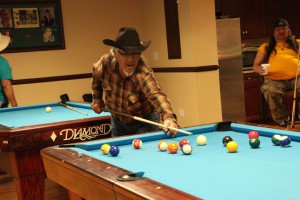 BIG CYPRESS — Seniors from several reservations came together for camaraderie, laughter and healthy competition at the Senior Pool Tournament held at the Big Cypress Billiards Center on Aug. 22.

As it usually is with old friends, the atmosphere was warm and comfortable. Seniors bantered easily as they made or missed their shots on the tables.

“I’ve been playing forever,” said Esther Buster, of Big Cypress. “It’s a hobby. It’s nice to get together with old friends from different reservations.”

Buster and Louise Osceola also participate in a pool league in Immokalee and play on a team every week.

Texas Billie, who has played since he was a teenager, still enjoys the challenges of the game.

“The most fun is making the bank shots; they are more entertaining than straight shots all the time,” said Billie, of Big Cypress. “If you miss the shot, it’s no fun; you have to make it. Even if you lose, you still enjoy the game. Playing is the most important thing.”

“I’m the best there is – just kidding,” Cypress said. “Any pool player will tell you that, whether they are or not. I’m always ready for competition.”

Tournaments are held every few months, but there are plans to increase the frequency.