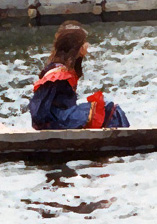 One out of three Native women will be raped in her lifetime, and three out of four will be physically assaulted, according to the U.S. Department of Justice. As those alarming statistics show, violence among Native women in the U.S. has become an epidemic.

With the help of the Indian Law Resource Center, the Safe Women, Strong Nations project was started to help raise national and international awareness against the growing epidemic in Native communities. Women like Tillie Black Gear, Cecelia Fire Thunder, Terri Henry, Karen Artichoker and many others spearheaded the project and continue their grassroots efforts today.

Because more than 80 percent of the violence occurring against Tribal women is perpetrated by non-Native men, Tribal courts have a hard time prosecuting and bringing the perpetrators to justice.

Safe Women, Strong Nations, however, helps fight the epidemic by educating Tribal communities with proper legal skills and Tribal jurisdiction knowledge.
If violence among Native American women is classified as an epidemic, then why are we just now hearing about it?

“It is an issue, but not an issue that is dealt with,” Seminole Tribe of Florida Family Services Director Helene Buster said. “However, it needs to be.”

“Every time I watch this video and read the onscreen statistics, I picture my mom, my sisters and fiancee,” Tribal member Jarrid Smith said. “Given the statistics stated and the fact that crimes like domestic abuse and rape go underreported, I know that the Native women in my life have experienced some form of violence which they haven’t expressed.”

“In my 10 years here in Brighton, we have had only one Tribal victim involved in something similar to a sexual assault and not too much violence involving women other than domestic,” she said.

Unfortunately, just because Sgt. Comito only has one report filed in her police records, the Seminole Tribe is not exempt from this violence epidemic.

“I see it happening,” Buster said. “It happens on a daily basis, but it is our culture that you stick with your family even if that means keeping it private.”

Many victims find themselves scared with no knowledge of what to do or where to go for help. Buster, a domestic violence victim herself, found herself in that exact situation.
“I didn’t know, I was too scared,” Buster said. “I didn’t know who to go to.”

If it is Seminole culture, and possibly other Native cultures as well, to stick with their family no matter what, even if that means turning a blind eye toward domestic violence and sexual assault, what is it going to take to stop the violence?

“It will take Native people saying to themselves that enough is enough,” Smith said. “It will take collective action by communities and loving by individuals to defeat this epidemic.”

Thanks to Safe Women, Strong Nations and the Indian Law Resource Center, some people are taking action.

In May of this year a delegation of Native women’s organizations met with Doudou Diéne, the Special Rapporteur on Contemporary Forms of Racism. The delegation educated the United Nations official on Native American violence and how Tribal courts are limited and discriminated against, making it difficult to fight violence. The Special Rapporteur took great interest in the subject and promised to include it in his report to the United Nations Human Rights Council.

Another group of Native women led by Navajo Nation First Lady Vikki Shirley traveled to the United Nations headquarters to raise awareness on the cause. They came forward asking the U.N. to make public safety on Indian reservations a priority and to give Tribal governments the authority to enforce Tribal laws against anyone on Tribal land.

“It will take initiatives like this one to break down the tolerance and acceptance that violence against women has built up,” Smith said.

What the Navajo Nation First Lady asked for is a service that the Seminole Tribe already offers: public safety is a priority. The Family Services Department and the Seminole Police Department offer help to those in need.

“Family Services is there to help people,” Buster said. “We want to help. Our counselors are trained on such topics as domestic abuse. We offer courses when needed. But we can’t change it if no one speaks up.”

The Indian Law Resource Center is also trying to help raise awareness about speaking up.
“The tendency to not act, to choose inaction, is what is defining us,” Smith said. “We take the easy route and don’t pick up the phone. We don’t use our voices to protect others.”

“A visit to a sovereign Indian nation will allow the Special Rapporteur to learn firsthand about the distinct legal barriers that prevent American Indian nations in the U.S. from protecting their women citizens,” said Painttown Rep. Terri Henry who also serves as the co-chair of the NCAI Task Force on Violence Against Women.

Most Native Americans do not have to visit a Tribal community to understand. Most have probably already witnessed firsthand the acts of violence toward a Native woman.
But Smith is in the rare minority that hasn’t seen it.

“Growing up I never saw a man hit a woman; on the rez that is a huge accomplishment,” Smith said. “So, most of all, I’m tired of that being abnormal.”

As the Indian Law Resource Center states, Indians are “warriors.” The Seminole Tribe prides itself on the idea of being the unconquered warrior, and they should not let violence conquer them.

Fortunately, the Seminole Tribe has the resources available to help stop this epidemic. People just need to speak up and reach out for help by calling their reservation’s Family Services Department.

Seminoles can make a difference and stop being complicit. Start by getting the word out about abuse against Native women.

There are other simple but important gestures that the Indian Law Resource Center suggests doing:
• Call or write your senators and representatives and ask them to reauthorize the Violence Against Women Act.
• Send a letter to international human rights bodies to investigate, report and comment on the United States’ actions and whether they meet international obligations.
• Donate to the Safe Women, Strong Nation project, so the women spearheading the initiative can continue to fight for justice.

“This issue needs to be recognized,” Buster said. “It takes the people.”