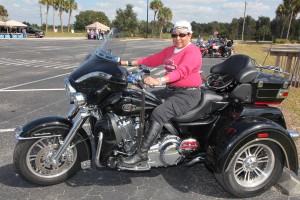 The event helped raise awareness for the Florida panther, classified as an endangered species by the Florida Fish and Wildlife Commission.

Several Tribal citizens rode out in full force to show off their wheels. Hollywood Tribal citizen Ollie Tiger, the mother of Big Cypress Tribal Council Rep. Mondo Tiger, was one of the featured riders at the weekend event.

“I just wanted to ride down here to see what was going on,” said Tiger, who has been an avid rider for the past seven years. “I like what the Billie Swamp Safari is trying to do.”

Big Cypress Tribal Board Rep. Joe Frank, who attended the Swamp Screamers show, talked about the importance of raising awareness for the Florida panther.

“We have a large panther population out here on the reservation lands,” Rep. Frank said. “The need for awareness is growing, and we support the Tribe’s efforts in doing what can be done to keep the habitat intact.”

The Florida panther is known as the state’s official animal and has a current population of around 100 panthers, according to the U.S. Fish and Wildlife Service.

About 150,000 people across South Florida – including those from Fort Myers, Miami and West Palm Beach – have supported the cause. Portions of the proceeds from the Swamp Screamers event went to the Wildlife Foundation of Florida, Sherman said.

The Billie Swamp Safari has recently opened its own panther exhibit to the public. According to Sherman, the two-story structure – conceptualized by Steve McNeil and Jodi Reynolds – is between 6 and 7 feet tall and features a high island in the middle of the exhibit’s enclosure.

The completed display is designed to house panthers who can view tourists and guests at eye level, Sherman said.

For more information on the Florida panther movement, visit www.floridapanthernet.org.