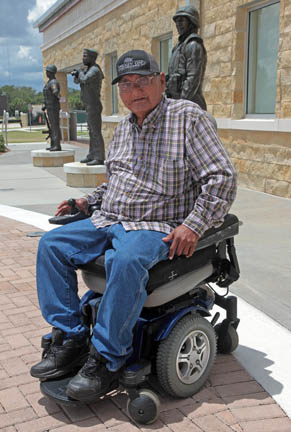 BRIGHTON — Veterans have each other’s back whether in combat or afterward. Vietnam War combat veteran Jack Smith Jr. experienced that firsthand when he was given a motorized scooter chair that belonged to a World War II veteran he never knew.

The late Eugene Guardabasso, of Palm Harbor, wanted his Quantum 600 scooter chair to go to a veteran. His nephew, Joe Kase, reached out to the Paralyzed Veterans of America, which contacted Elaine Westermeyer, of the U.S. Department of Veterans Affairs. Westermeyer called Marc McCabe, of the Vietnam Veterans of America (VVA) in St. Petersburg, who knew exactly who could use it.

“The Veterans Administration turned down Jack’s request for a scooter, so we found him this one,” said McCabe, regional director of VVA. “Vietnam vets get denied more often than younger veterans. As a Vietnam vet and the VVA bureau chief, I assist Seminole veterans.”

Smith, 66, served in the U.S. Army in Germany and Vietnam from January 1968 to November 1969. He earned a National Defense Service Medal, a Vietnam Service Medal, a Sharpshooter Medal, two Overseas Bars and a Vietnam Campaign Medal for his service to the country.

Smith suffers from Type 2 diabetes, lower neuropathy and heart disease, but the VA says he does not meet the criteria for a power chair, said Westermeyer, who believes the donated chair will greatly improve Smith’s quality of life.

“I have to learn how to operate it first,” said Smith, of Brighton. “Last week I had to borrow a scooter to go shopping. This will come in handy.”

The six-wheel Quantum 600 is operated with a joystick, can travel up to 4 mph, has a tight 20-inch turning radius and lasts up to 20 miles on a charge. It even has a seat belt.

During WWII, Guardabasso served on the USS Intrepid, Boxer, Yorktown and Lexington aircraft carriers in the Pacific theater. All were involved in the heavy battles. Guardabasso earned six stars for six major campaigns, a Victory Medal and a Presidential Unit Citation for the Battle of Midway. He came home a disabled veteran after the Lexington was hit by a Japanese torpedo. He spent the rest of his life in wheelchair or scooter before passing away earlier this year.

After Guardabasso’s death, Kase made sure his uncle’s request for the scooter was honored and he facilitated the transaction, McCabe said. The recipient of Guardabasso’s last wish was glad to benefit from it.

“Now I’ll be able to get to events easier,” Smith said. “Between my cane and my scooter, I’ll be all set.”