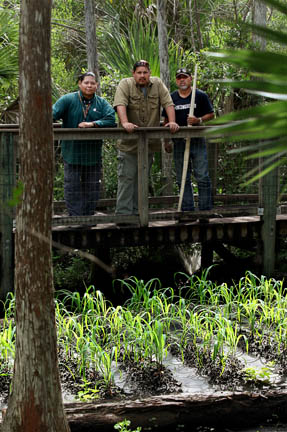 BIG CYPRESS — Sometimes community outreach begins by planting seeds in your own backyard.

“This shows culture in action – history brought to life,” said Van Samuels, a Tribal community outreach specialist at the site of a new authentic Seminole garden on the grounds of Ah-Tah-Thi-Ki Museum.

The 1,000-square-foot garden built by Samuels and outreach specialists Jacob Osceola Jr. and Rey Becerra in early July had already begun to flourish only 14 days later with 2-foot-high corn plants and several sweet potato vines. Nearby, native cabbage palm trees and exotic guava trees, brought to the area in the 1800s from South America, provided a natural canopy to the garden that would soon also sprout peas, beans and pumpkins.

Persimmon and grapes still grow wild in the surrounding area as they have for centuries.

Osceola said the garden design and what to plant were plucked from archival data that included photographs from the 1930s through the 1970s and elder interviews from the Museum’s oral collection. The trio used two types of traditional planting: cypress log border beds and raised mounds. Both styles use rich soil gathered from high patches of land in the water-abundant Everglades.

The cypress logs came from trees leftover from the recent construction of a water retention area and naturally felled trees.

“Knowing how important gardens were long ago is important today. It’s been in our culture forever,” Osceola said.

Corn was planted first. The kernels came from Becerra’s friend who brought them from Cuba about 10 years ago. When the corn stalks are strong enough, they will serve as trellises to hold peas and beans off the ground and keep them dry. Pumpkins will be planted last using Seminole pumpkin seeds provided to the Tribe in May by the Historic Hernando Preservation Society at the dedication of the Chocochatti historical marker near Tampa.

Samuels said the same garden plants were grown by Tribal ancestors to sustain family camps in the Everglades, but they were also easily transplantable during the Seminole Wars when camps were quickly moved to new locations.

“Our ancestors would gather what they could, carry the seeds, the plants, and start all over again,” Samuels said.

Through Native American generations, the planting technique has been called Three Inseparable Sisters. Corn, beans and squash, as main ingredients, support each other by virtue of plant size, stem strength and leaf function. They protect each other from sun, rain and foraging animals while keeping soil moist and fertile with nutrients.

During rainy season, elders occasionally planted gardens on tree islands. Samuels said the current garden can withstand up to 6 inches of rainfall.

No pesticides or fertilizers were ever needed.

“If bugs were ever a problem, we would pick them off with our fingers,” Osceola said.

The plot will eventually also include sugar cane and several types of melons.

“The gardens of the 1840s were different from the 1920s, so ours will also evolve,” Samuels said in reference to oranges from China via Spain that eventually became a Florida industry. “It was always a balancing act of native and non-natives, cultivated plants and whatever grew wild. Everything goes to sustainability. It was a blessing to dedicate our minds to our gardens – and get a decent meal.”

The garden is near the end of a mile-long boardwalk that stretches through natural swamp land to the scene of a native camp. Paul Backhouse, director of the Ah-Tah-Thi-Ki Museum and Tribal Historic Preservation Officer, said the garden provides an additional and historically accurate experience for visitors. He said the idea to build the garden came during a visit to the Hibulb Cultural Center and Natural History Preserve in Washington state. Tulalip Tribe elder Veronica Leahy tends a cultural garden at Hibulb that reconnects Tribal members to their roots while teaching how natural foods can thwart common Native American illnesses, such as diabetes.

Samuels said gardens can be credited for the very survival of the Seminole Tribe.

“Here we are in 2014 in a simple garden that teaches technology, history, culture and survival and teaches the young what our elders endured. We are still here today because it was passed down generation to generation,” Samuels said. “On a spiritual level, what we ate was from the Creator. It healed our body and mind.”