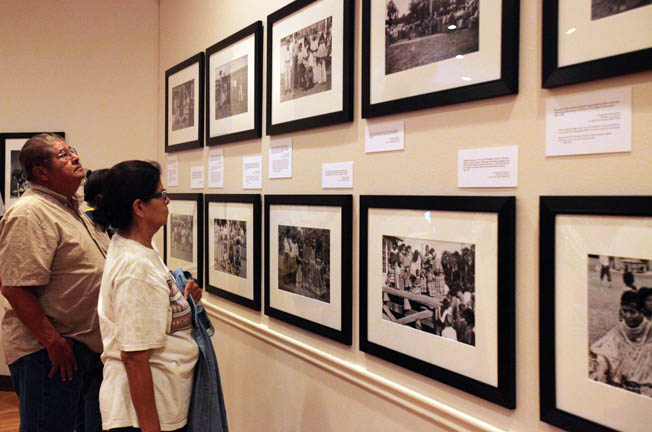 BRIGHTON — Capturing a moment in time, the newest Ah-Tah-Thi-Ki Museum exhibit illustrates the early days of the Brighton Reservation through 27 historic photographs. But more important than the black and white photos are the stories shared by the people who lived them.

“The objects don’t mean anything without the stories behind them,” said Paul Backhouse, director of the Museum and Tribal Historic Preservation Officer. The exhibit, titled “A Brighton Tribute: A Celebration of the Reservation through the Boehmer Collection,” opened Aug. 8 at the Brighton Field Office auditorium.

Accompanying each photo were placards describing memories from the likes of Geneva Shore, Edna McDuffie and Polly Hayes, while reception attendees told stories of growing up on the reservation.

The photographs were pulled from the 2,000-plus images of the Boehmer Collection with input from Tribal community members to celebrate Seminole culture, Brighton Reservation and the Boehmers.

William Boehmer arrived at Brighton Reservation in 1938 with his wife, Edith, after being hired by the Bureau of Indian Affairs as the teacher of the newly established Brighton Indian Day School. Brighton Tribal member Richard Osceola, with the backing of community members, had pressed assistant commissioner of Indian Affairs H.A. Zimmerman for a school of their own. It opened Jan. 9, 1939 with eight students.

Many photographs on display are of Brighton Indian Day School students, including one of Boehmer’s pupils in 1939 posing in front of a Christmas tree.

Coleman Josh, who attended the school from first through sixth grade, said he remembers singing Christmas carols around the Christmas tree while Boehmer played the piano.

“He was a nice, nice man, and he was a good teacher,” Josh said, adding that before officially starting school, he would sneak onto the school bus. His mother did not want him to attend school but his curiosity got the best of him. “I enjoyed going to school there.”

Other photographs include images from Brighton Field Day in 1941; John Josh, Charlie Micco and Willie Gopher posing for a photo circa 1939 as the first elected trustees of the cattle program; and Geneva Shore and Edna McDuffie in formal gowns while attending Okeechobee High School in 1959.

“I went to the prom. I didn’t know what it was or that I needed a special dress or anything,” McDuffie recalls in a quote below the image. “Mrs. Boehmer took Geneva and I to Orlando to get us our prom dresses. We didn’t know how to pick out a dress. That was the kind of thing they did. I’m sure we had to get everything – shoes, the dress and undergarments. I guess Mrs. Boehmer paid for this somehow, but she made sure we would be dressed right for the prom.”

The exhibit serves the dual purpose of continuing the Boehmers’ legacy and enriching the lives of the Brighton community through the photographs and accompanying stories, said Rebecca Fell, the Museum’s curator of exhibits.

“It’s about making sure the story is being told by the people who lived it,” she said. “These older generations look at the pictures and remember so many things, so I hope the exhibit offers a powerful way of passing on these stories to the younger generations.”

Through 28 years of service with the Tribe, the Boehmers catalogued 2,137 photos. In 2009, the Museum acquired a copy of the collection and corresponding index cards that provide the location, date, event, activity or people in the photographs.

The original negatives and another copy of the prints are housed at the National Anthropological Archives of the Smithsonian Institution.

During the reception, 17 binders containing all the photographs lay on a table for attendees to peruse, while digital copies were made available on a computer. Order forms allowed community members to request free copies of pictures portraying family members or significant events.

“We hope people feel like the exhibit is for them; it’s for the Tribe,” Fell said. “This belongs to them.”

The exhibit is open to the public through Oct. 31.