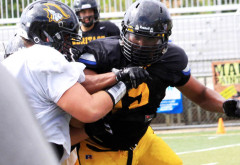 PLANTATION — American Heritage School’s Mike Rumph wouldn’t mind coaching more Seminole Tribe football players from Big Cypress. Thanks to the Jumper brothers – Andre and Blevyns – the coach of the defending Class 5A state champions likes the caliber of player that comes from the reservation.

“Both of them are country strong, tough-nose kids. That’s what I like. They both live on a farm in Clewiston. They don’t mind being aggressive and rough,” Rumph said as his team, ranked among the top 25 high school teams in some national preseason polls, practiced Aug. 11 on its home field in Plantation. Heritage is ready to embark on one of the toughest schedules in the nation.

As a 6-foot-1, 225-pound starting linebacker/defensive end, Andre is accustomed to being in the middle of the action. The senior captain, who wants to secure a scholarship to a Division I college, not only corrals opponents with two legs, but he also battles those with four. Being involved in local, regional and national rodeo competitions most of their lives has helped Andre and Blevyns prepare for the physical rigors of football.

Roping a raging animal and halting a speedy running back are challenges Andre likes to tackle.

“It’s a lot different because steers are 300-plus (pounds) and they run a lot faster and harder than a running back,” said Andre, who team ropes and calf ropes. “My parents (Josh and Andrea Jumper) tell me every day don’t forget where I came from because I’m a cowboy. I hunt hogs, I steer wrestle steers to the ground; football should be a breeze to me.”

Blevyns, a junior who is slated to be the team’s snapper for punts and field goals as well as a backup wide receiver, shares his older brother’s sentiments when it comes to rodeo competition.

“I like roping because it gives me more of an adrenaline, but riding rough stock and bucking horses and watching the bulls, that’s fun, too, but it’s kind of dangerous on the body,” said Blevyns, whose 6-foot-3, 180-pound frame is ideal for a wide receiver, but not so much for some rodeo events. “I rode bucking horses when I was a lot shorter than this. I got too tall for it.”

“I used to bull ride, but I got a little too big for that,” he said.

But Andre does employ a bullish approach on the football field.

“(Andre) said last year that when you ride bulls, there ain’t much on a football field that is going to scare you,” said Mike Conrad, Heritage’s defensive line coach. “On game day, don’t bet against him. What he may lack in fine technique, he makes up for it in drive and ambition. I joke that he’s one of those guys who could have his leg amputated in the morning and he’ll get five or six tackles at night. He’d find a way to play.”

After helping Heritage compile a 14-1 record and capture its first state title last year, Andre spent the offseason doing the things necessary to attract colleges’ attention, including bulking up.

“He was here all summer. He dedicated himself. He put on about 10 or 15 pounds of muscle,” Rumph said. “He did a good job at a Florida State camp where they offered him a preferred walk-on, but I know Andre wants more than that.”

Andre said he also has preferred walk-on offers from Florida Atlantic and Florida International, but it’s a scholarship he’s after. He’s not being picky about where he’ll end up.

“I want them to actually tell me that they want me and that they want to offer me a scholarship. I’m working towards it, but that’s for anywhere, not only Florida State, but anywhere I can get one,” said Andre, who was noted as a top performer at a Football University i350 combine in March.

Visits to Auburn and Clemson are on Andre’s agenda, as well as an FSU home game via an invite from the defending national champions.

“He’s in pursuit of that offer, to the point where he has a chip on his shoulder and he’s going to do all he can to get that,” Rumph said. “His goal is FSU, but I think by the end of this year, a lot more schools are going to come after him because of the size he’s put on and his athleticism. Knowing what he’s done last year, I think he’s going to add on to it as a player. When he gets his first offer from Division I, I think others are going to follow suit.”

Andre hopes to pick up where he left off last season when he made a smooth transition from safety to a linebacker/defensive end.

“Andre’s year last year was amazing … and it seems like it was light years as far as how much better he got being closer to the ball,” Rumph said. “The minute we moved him up closer to the line of scrimmage he became a premier player for me.”

As a junior, Andre registered 72 tackles, including a season-high 11 against Key West. He tied for the team high in sacks with five. Perhaps Andre’s finest moment came in the state title game, on and off the field.

“You could hear him in the locker room before the game,” Rumph recalled. “He became a big-time leader for us at that point, and it’s translated over to this year.”

Andre’s eight tackles against Clay County tied for game high. Five of those tackles came in the first quarter when the game, which turned into a blowout, was still somewhat close. He also made the game’s only fumble recovery.

This season Andre’s leadership as a captain was tested early. Moments after a player departed the field following a verbal spat with an assistant coach during a preseason practice, Andre and a trio of fellow seniors gathered the team near midfield and advised the players to stay focused. That example of leadership is something Blevyns has come to expect from Andre, not only as a younger brother, but as a teammate.

“It’s fun to play with my brother because he’s very motivational,” Blevyns said.

This season could be another memorable one in the Jumper household. It marks the first time Andre and Blevyns are on the varsity together. Last year, Blevyns helped Heritage’s junior varsity to an undefeated season as a starting wide receiver and defensive end. Rumph said he’s noticed a change in Blevyns compared to a year ago.

“He’s way more focused than he’s ever been,” Rumph said. “He’s always been a basketball kid who plays football, but now he’s acting more like a football kid.”

Witnessing the varsity’s championship run last year has made Blevyns eager to help the team attempt a repeat.

“It was really exciting to watch them go all the way to states and win,” Blevyns said. “I really wish I was a part of that so I could get me a ring. I’m hoping we get a ring this year.”

Heritage lost some stars from last year’s team, but it returns plenty of talent, including the highly recruited duo of defensive back Tavarus McFadden and quarterback Torrance Gibson.

“We can be just as good as last year,” Andre said. “Last year was a good team; this year we have a lot of young guys. I think we can do it again.”