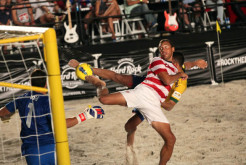 All it took was more than 2 million pounds of white silica sand – trucked in from Central Florida – to make the Seminole Hard Rock Hotel & Casino U.S. vs. Brazil Beach Soccer Challenge a reality on a paved parking lot in front of the Hollywood venue.

Brazil edged the U.S., 8-7, in a spirited clash on sand dampened by pregame rain. The American team, which rarely plays on home soil, was grateful for the evening despite the score.

“The Hard Rock really put on a great environment,” said U.S. forward Andrew Feld, 26. “The music, the people, everything that we wanted was here tonight. It was amazing. It got us going and it got the crowd behind the game. It was spectacular.”

“It’s a heated game,” added U.S. forward and captain Nick Perera, 28. “They want to win. We’re trying to show who we are, too. No one is going to sit down and die. There’s a little bit of animosity every time you play Brazil, but it’s a wonderful event for spectators. We’re really excited to watch it on TV.”

Perera said this was only the second time in three years that the U.S. has played a home match. The team’s previous home game was in 2011 in Miami. Playing games in locations known for their beaches has its perks.

Most of the dozen players on the American roster, including Perera, are from California. The two exceptions – defender Giovanni Garcia and goalie Aldo Balsano – live in Miami. Coached by Eddie Soto, the team will play qualifying matches later this year for the 2015 Beach Soccer World Cup in Portugal.

“You might get a broken toe here or there, but it’s great,” Valentine said.

With smaller real estate – a beach field is about one-third the size of a regulation soccer field – action is fast and scoring chances frequent among all 10 players – including goalies – on the field. Some of the toughest saves made by U.S. keeper Chris Toth came from shots launched by his counterpart at the other end, Jenilson Rodrigues, about 30 yards away.

Just 17 seconds elapsed before chants of “USA, USA, USA” filled the air when U.S. forward Jason Leopoldo scored the game’s first goal. However, by the game’s halfway point in the second of three periods, the Americans trailed 6-3. Jason Santos ignited a stirring U.S. rally as his goal and a tally from Garcia closed the deficit to 6-5 after two periods.

The Americans kept the momentum going early in the third period. Perera knotted the game at 6-6 and Feld drilled a low shot past Rodrigues to put the U.S. in front, 7-6. But the lead slipped from the Americans’ grasp as Brazil rallied with two goals in the final five minutes to claim the victory.

The party-like atmosphere that extended throughout the game started before the teams took the field. A live band performed on the western edge of the layout. About a dozen food trucks lined the northern side.

Spectators, some clad in U.S. or Brazil colors and a few waving American flags, filled bleachers on the east end. Fans in a VIP section on the south side were accompanied by large fog-spewing, glowing robots, while models wearing shorts, shirts or bikinis matching the teams’ colors watched the game from a hot tub.

Youngster Julia Dale, a good-luck charm for the Miami Heat, sang the U.S. national anthem. Both teams honored retired U.S. player Francis Faberoff, of Hollywood, with gifts during a brief ceremony before the teams squared off.

“It was fantastic,” Perera said. “The music, the crowd, the setup, the big screen. It was amazing. Really well done. We were talking about it, and we wish we could do an event like this once a month.”