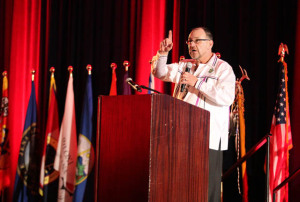 Under the motto “Strength in Unity,” USET convened the 52-member Board of Directors made up of tribal top brass and USET’s 12 committee chairs to address multi-tribal concerns from culture and heritage to social services, tribal justice and veteran affairs.

Looming, however, were several U.S. congressional issues that affect Indian Country. Among the focus items: the Carcieri Fix, which aims to correct a 2009 amendment to the 1934 Indian Reorganization Act that muddles land into trust opportunities; trust modernization to compel Tribes toward comprehensive and integrated land use planning and self-determination; and congressional approval for a $460 million Indian Health Service increase.

Joel M. Frank Sr., Seminole Tribe director of Government Relations and Initiatives, sat in for Chairman James E. Billie who was unable to attend. Frank voiced an additional concern: the Keystone XL pipeline, which will skirt about 17 reservations and impact sacred lands and natural resources in the Central Plains.

Congressman Raul Grijalva (D-Ariz.), who asked to appear before USET, called the Feb. 11 congressional approval of the pipeline “sad” and noted that the vote occurred “under the cover of night.”

“For eight years we were able to hold it off. It is such a struggle but not a fait accompli. Assessments have to happen to determine the dire effects on water, religious and sacred sites,” Grijalva said.

USET President Brian Patterson (Oneida Indian Nation) responded, “We know our place in the universal view. But will we stand to the side and scream our opposition? Or can we do something?”

Several resolutions submitted by USET committees were passed by the board during the organization’s closing business session Feb. 12.

Moving forward in 2015 is support for: Tribal citizen rights to gather plants and medicine at national parks; a formal inquiry into the 1965 murder of Passamaquoddy Tribe member Peter Francis, in Maine, and a task force to examine the unsolved killings of Wabanaki people; authorization of applications for federal funding for natural resource management programs; and ecosystem recovery, specifically to return the productivity of fisheries for tribal survival and sustenance.

During previous days, USET committees met in smaller sessions to receive issue updates from government agencies and to provide feedback.

During one afternoon alone, the Culture & Heritage Committee met in 45-minute increments with the Office of Native American Affairs, the U.S. Department of Housing and Urban Development, the U.S. Army Corps of Engineers, the U.S. Forest Service, and a preservationist for ceremonial landscapes with the National Tribal Historical Preservation Office.

“This is an opportunity for us to meet face to face for updates on what is going on and to share ideas and plans for what needs to happen next,” Bowers said.

The Seminole Tribe was highlighted several times during the conference.

Patterson singled out the Tribe for seizing historic opportunities in 2015, such as becoming the first Tribe to earn gaming self-regulation through the National Indian Gaming Commission and the second USET member Tribe to attain autonomy in land leasing through the Helping Expedite and Advance Responsible Tribal Home Ownership Act (HEARTH Act).

“He leaves a legacy of leadership, love, passion and political activism for his homeland, and he leaves a vision for the future that we still embrace today,” Patterson said.

Good news discussed among all attendees was Obama’s newly proposed national budget for 2016 that increases funds for Indian Country by $1.9 billion.

According to the National Congress of American Indians analysis, highlights of the 2016 budget include: $34 million to extend broadband Internet and computer access at all Bureau of Indian Education schools; $53 million for Native Youth Community Projects; $4 million to establish a one-stop tribal support center for access to service throughout U.S. agencies; and $30 million for the Human Health Services Tribal Behavioral Health Grant, including $15 million for mental health and $15 million for substance abuse prevention.