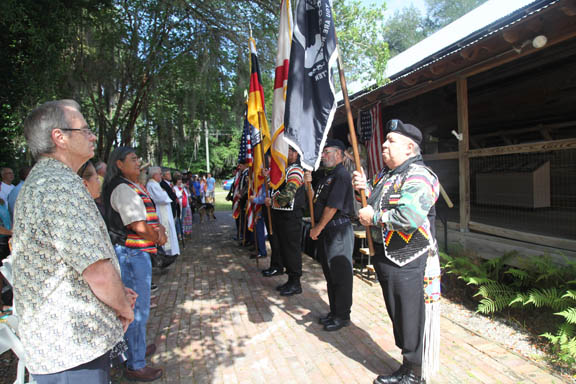 MICANOPY — A crowd of more than 500 filled the field next to the Micanopy Historical Museum for a special ceremony May 25 that honored both the U.S. soldiers and Seminoles who perished in several of the most violent battles of the Second Seminole War, which occurred more than 180 years ago in and around the Alachua County town.

The Memorial Day remembrance was co-sponsored by the Seminole Tribe of Florida.

“And so we are assembled here today to honor all the combatants who lost their lives regardless of which side they fought on,” Mayor Virginia Mance said in opening remarks.

Joe Knetsch, widely regarded as a leading expert on the Seminole Wars, also addressed the audience.

“The Second Seminole War, as the mayor has just told you, is America’s longest and bloodiest upon Native Americans, and even the most costly and much more so than the statistics will ever reveal. One thousand five hundred American military personnel died in this war, but how many Native Americans, African Americans or civilian settlers, travelers or shipwrecked sailors lost their lives and became victims in this war?” asked Knetsch.

The Seminole Tribe was represented by Chief Justice and longtime historian Willie Johns, who sat in for Chairman James E. Billie.

“I bring you greetings from the Seminole Tribe. We are 4,000 strong and we thrive,” Johns said. “We believe in honoring the veterans. One day if you ever go south and come to Brighton, we have a veterans center there that is shaped like a star and each branch of the military is represented.”

Johns said Seminole Tribe members have fought in World War I, World War II and Vietnam, and the Tribe always honors its veterans.

U.S. Army certified American military history instructor Maj. Richard Bustamante, a cadet instructor and operations officer for the Army ROTC program at the University of Florida and a veteran of two combat deployments in Iraq, said the Army’s mission is to conduct land-based combat and warfare operations at the request of the American government.

“It was in these nearby combat actions that occurred in the mid-1830s that resulted in significant loss of life while trying to strive to meet the objectives established by Washington,” he said. “The soldiers assigned to the north central region of Florida endured immeasurable obstacles both from a harsh environment and a talented and skilled opposing force made out of hardened combat veterans fighting in territory that was both austere and favored the attacking forces that had a significant home-field advantage.”

Stephen Bowers, a Vietnam veteran and liaison for the Florida Governor’s Council on Indian Affairs, said this was his first visit to the town after many trips past the Micanopy area while headed to Gator or Seminole football games.

Bowers introduced Tribal members in attendance, including Big Cypress Board Rep. Joe Frank, Agnes Motlow and Loretta Micco. Bowers then promoted a special project he has been working on for five years: the American Indian Veteran Memorial, which seeks to add a bronze American Indian/Alaskan Native soldier statue to the National Mall in Washington, D.C.

“After about two years of hard work, Congress finally approved our statue of the American Indian/Alaskan Native veteran and that goes back for all the wars, the Revolutionary War, World War I, World War II, Korea, Vietnam and of course up to today’s war in Afghanistan,” Bowers said.

He said they are planning construction on a 22,000-square-foot facility to be built underground called the Education Center at the Wall. It has already been approved by Congress, and they hope to break ground in 2017 when they have secured the necessary funds for construction.

Then, while the Rev. Stanley Strobles rang the old Memorial Bell, the names of 59 soldiers who died while stationed in Micanopy during the Second Seminole War were read aloud. No one knows how many Seminoles perished.

“No loss of life in service to our country comes free of charge. The names being read today each carry a story which was never completed, eternally interrupted, regardless of the manner to which death came,” Bustamante said. “Please acknowledge the service members which lost their lives did so not for personal gain but for collective advancement of a young nation. This Memorial Day please find the time to remember the past and present warriors associated with our great nation’s long traditions of military service.”