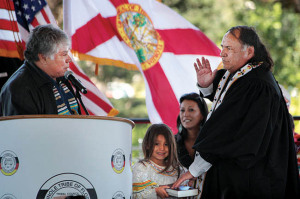 HOLLYWOOD — Furthering sovereign rights of self-government and self-determination, the Seminole Tribe of Florida celebrated the creation of its Tribal Court system Feb. 19 at the inauguration of its first panel of six Tribal justices and judges.

Just yards from the landmark Council Oak where the Seminole Constitution was signed in 1957, Chairman James E. Billie presided over a solemn ceremony that cemented a new historic milestone via judicial oaths of office.

“It allows us to stay in tune and in touch with who we are. It’s a way for our people to move forward in sovereignty,” Tommie said.

Pledging to defend the Seminole and United States constitutions, the justices and judges also promised to “administer justice without respect to persons, and do equal right to the poor and to the rich … and to faithfully and impartially discharge and perform all the duties” required.

The judges and justices are charged with resolving civil disputes through the Tribal Court’s two branches – a trial court where judges try new cases and an appellate court where the justices hear appeals on prior rulings.

Helene Buster, director of the Tribe’s Family Services Department, was among more than 300 Tribal members and local and state officials who turned out to mark the occasion.

“Wow, it’s finally here and we are all very, very happy,” said Buster, who with Deloris (Lois) Alvarez, of Immokalee, and many other Tribal members, created the Tribal Court Committee in 2005.

“We’ve been on this since day one. For 10 years. That is forever ago,” Buster said.

“It means we are on our own, and it gives teeth and bones to our sovereignty,” Alvarez said.

Maggie Osceola, her long hair traditionally rolled in a hairnet and secured with pretty hairpins, held the Bible on which her son, Chief Judge Moses B. Osceola, swore the judicial oath.

Stan Wolfe, the director of the Tribe’s Tribal Court, will oversee court operations. Wolfe, who studied law at Washburn University in Kansas, is a past project manager for the Justice Research and Statistics Association, former prosecutor for the Little River Band of Ottawa Indians and former magistrate for the Eastern Band of Cherokee.

Wolfe said Chief Justice Johns and Chief Judge Osceola were to begin working full-time schedules immediately after taking the judicial oath. Court offices are staffed and furnished in Hollywood and Big Cypress, but hearings can be held anywhere as needed.

“The other judges and justices will work on a case-by-case basis. If they are needed more, they will work more,” Wolfe said.

The courts will deal primarily with civil cases, such as child welfare issues and Tribal member disputes.

Chief Justice Johns said the justices and judges started training in December 2013 after they were chosen by the Tribal Court Committee and then approved by a panel of elected officials and elders. Individually, they immersed themselves in a variety of independent law courses, but they also attended law conferences and symposiums as a group across the nation.

According to the Tribal Court Clearinghouse, a project of the Native American-owned and operated Tribal Law and Policy Institute, the Indian Reorganization Act of 1934 restored power to Tribes for establishing justice codes and court systems.

More recently, President Barack Obama’s 2013 reauthorization of the Violence Against Women Act gave Native American courts the right to prosecute non-Natives who do not live on tribal land for charges of domestic or sexual violence on reservations.

In February 2014, the Tulalip Tribes of Washington state became the first in the nation to take criminal jurisdiction over non-Natives who commit domestic violence on a reservation.

Prosecution of such cases is allowed to begin in May 2015.

“When any guy can come on a reservation and abuse a woman, it’s one of the worst things to happen on our land,” Justice Jumper said.

Generally, according to the BIA, tribal courts have civil and also criminal jurisdiction (if so structured) over Native and non-Native people who break tribal laws while residing in, participating in functions at, or doing business on reservations.

He predicts that the court program will expand in time for the Tribe and Indian Country.

“There are many injustices that Native courts could take on – all the way up to honoring treaties that were made when America was formed out of our land,” he said.