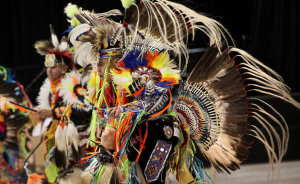 HOLLYWOOD — After nearly a decade of hibernation, the spirited all-Tribe dance competitions of the Seminole Tribal Fair and Pow Wow roared back to life with a bigger and better turnout than bygone years.

With 205 competitive dancers, seven drum groups, flag bearers from four Tribes and Tribal leaders from regions throughout Indian Country, the floor of Hard Rock Live was filled Feb. 6-8 for the duration of the 44th annual event.

“I know how hard it is for everyone to get here. Everyone has budgets they have to be aware of. Just coming out is a testament to what everyone does and what they all believe in,” said Hollywood Councilman Chris Osceola, who served as Tribal Fair director.

For drummer Mervel LaRose, a member of the Fond du Lac Band of Lake Superior Chippewa Tribe, just being there was a blessing. His Native American Music Award-winning drum group, The Boyz, based in Minnesota, placed first in the northern drum competition.

“We get to see different people from different Tribes. And, basically, the weather is nicer here than in the minus 15-degree temperatures we left in the Twin Cities,” LaRose said.

The Seminole Hard Rock Hotel & Casino Hollywood campus, including Hard Rock Live and the Seminole Paradise parking lot, was flooded with Indian Country visitors from Georgia to California to Canada.

Nearly 8,000 people per day attended the event, shopped at more than two dozen Native jewelry and clothing vendor booths, dined at eateries including several that offered sofkee and Indian burgers, and jammed out during concerts by Indian Country favorites Derek Miller, Jonny Lang and Guthrie Brown.

Homegrown entertainment was provided by the Cowbone Band and the Osceola Brothers Band.

Gloria Wilson, the top coordinator for the event with assistance from Wanda Bowers, said her phone began ringing almost immediately after the event was posted on Powwows.com and continued ringing practically around the clock because of global time zones.

“I had responses from all over Indian Country, Canada and everywhere. We really made the effort to get the word out – even to South America and Africa,” Wilson said.

One phone call came from a shortwave radio station that hosts public interest segments worldwide. When the station called, Wilson had 10 minutes to prepare for a five-minute, on-air interview that went global. Local television and radio spots were also worked into Wilson’s hectic schedule.

The crowning of Little Mr. and Little Miss Seminole at Hard Rock Live plus the Bill Osceola Memorial Rodeo on the Big Cypress Reservation rounded out the weekend events. More than 50 novice cowboys and cowgirls competed in the youth rodeo division.

But Wilson credited most of the daily crowds to the return of the pow-wow dance competitions and a lineup of national professional pow-wow hosts. With advertisements that named Ronnie Goodeagle as arena director, Delaine Alley as head judge, Colin Stonechild as head singing judge and Joaquin Hamilton as emcee, the pow-wow regulars followed.

At the start of the first grand entry, in which nearly 300 filled the arena floor, Hamilton enlightened an audience that included students from Miami-Dade, Broward and Seminole schools to the importance of Native drums.

“Hollowed-out trees were covered with animal skins and used in ceremonial prayer to bring good thoughts. We look to the drumbeat as the heartbeat of our spirit. It is in that spirit, in the music, that makes you feel good and dance,” Hamilton said. “No matter what Tribe you are from, we are all Native Americans.”

Hollywood Board Rep. Steve Osceola said the entire three-day happening was a family affair. His home was made available to two or three families that needed a place to sleep during the fair and pow-wow.

“It’s all good. It’s about getting Native folks to come to South Florida. The more people who come here, the more we get to teach that we do not live in teepees. We will throw in a few alligators, though,” Rep. Osceola said.

At least one Hollywood, California family made a return home to Hollywood, Florida.

Film and television actor Adam Beach, of the Saulteaux First Nations in Canada, was the event’s celebrity guest who walked in all the grand entries and sat for autographs during meet and greets. Beach and Summer Tiger, who is Seminole, have a daughter, Phoenix Tiger Beach.

“The best part of being at any pow-wow is meeting more nations, more family and sharing our stories,” Beach said.

And age is no limit to gathering with like minds across thousands of miles.

At age 84, Bert Waters, of the Wampanoag Tribe in Massachusetts, said attending at least one pow-wow per month keeps him young. A veteran Marine who served in the Korean War, Waters often raises weapons in war dress to compete in the men’s golden age dance competitions.

“It’s our life and it’s our particular, general and interchanging of the cultures. We have so many Tribes but a commonality of culture. It brings tears to my eyes when I see our flags wave,” Waters said.

Seminole Tribe member and photographer Marty Bowers said he had never experienced a better Seminole Tribal Fair and Pow Wow. It had been more than 15 years since he last attended.

“I missed it, but it wasn’t the same for a long time. Now, I see the competition, the colors, the music, the movement and I want to capture it all. It might be time for me to jump on the pow-wow trail,” Bowers said.