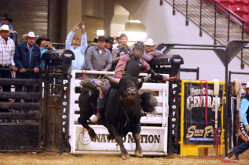 “It makes it more fun,” Dyami said a few days after he returned from the Indian National Finals Rodeo held from Nov. 4-8 at the 4,600-seat South Point Arena & Equestrian Center in Las Vegas.

The highlight of Dyami’s trip out west was his second-place finish in the short go round on the final day. Other top performances from the Tribe included Trina Hipp, who finished sixth overall in ladies breakaway roping, and Naha Jumper, who finished eighth in tie-down roping.

Dyami said he was the youngest rider in the short go bull riding, which featured 13 competitors and plenty of angry bulls.

Ten of the first 11 riders were sent to the dirt by bulls before the eight-second horn sounded. Dyami, the fourth rider out of the gate, was the only one who conquered a bull and reached the eight-second plateau. Later, Slick Phillips, of Porcupine, South Dakota, also stayed on for eight seconds. He and Dyami were the only two to do so.

Dyami registered a score of 76 points in the short go which earned him $2,300 in prize money and he finished seventh in the overall competition, but it was the thrill of competing that he enjoyed the most.

“It was cool. The adrenalin makes it fun,” said Dyami, whose mother, Danielle Howard, attended the competition.

In the first three days at INFR, Dyami placed eighth with 66 points in round 2 and was bucked off in two other rounds.

Dyami, an Eastern Indian Rodeo Association champion, also competed in the junior bull riding division at INFR. His best showing was a tie for fourth in the first-round session.

A few days after returning from Las Vegas, Dyami was back in South Florida preparing to hit the road again for competitions in Myakka City and Arcadia.

Hipp, 28, made her seventh trip to INFR a memorable one. Her sixth-place overall finish was a career-best at INFR.

“I look forward to it every year. It’s fun to go against hard competition,” said Hipp, of Brighton, who has been roping for about half her life.

Hipp’s top performance came in the short go round in calf roping where she placed fourth. She said her time of 4.8 seconds didn’t come close to her best time ever, but it still netted her nearly $1,200.

Jumper shined in tie-down roping’s second round when he finished sixth out of 31 competitors. His time was 11.16. In August, Jumper and Justin Gopher teamed up to win EIRA’s team roping title.