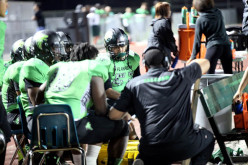 PEMBROKE PINES — Neko Osceola is making the most out of his brief tenure with the Flanagan High football team.

After three years at American Heritage School in Plantation, Neko switched to Flanagan for his senior season. He arrived just in time to be part of the most successful season in Flanagan’s history. As of mid-November, Flanagan was in the midst of its postseason, but the Falcons had already chalked up plenty of accomplishments, notably the program’s first undefeated regular season, first district championship and first playoff victory.

“We’re trying to do a lot of good things around here,” said Flanagan coach Devin Bush. “We’re progressing and growing, trying to build a good program that we can nurture our kids and get them things they need to be successful, not only in football, but off the field as well.”

Neko said the transition to a new school and new team has been smooth.

“It’s been a fun experience. My teammates are cool. We all get along,” he said before a practice in early November. “It’s been a good year. I’m getting a lot more playing time over here.”

When Neko joined Flanagan he figured he would continue playing his usual position at linebacker, but Bush – who was a strong safety on Florida State’s first national championship team in 1993 – had other plans for the 5-foot-10, 220-pound transfer.

“I switched him to the (defensive) line,” said Bush, who also won a Super Bowl with the St. Louis Rams. “He has a big strong body, wide shoulders, thick build, so I moved him to the defensive tackle/defensive end spot because we had a need there. He helped us fill that role. He has good strength to stop the run, so we like to use him a lot in running situations.”

In addition to head coaching duties, Bush also handles defensive coordinator chores. Flanagan’s defense was tough to score against in the regular season. It allowed only 19 points during a five-game stretch against Boyd Anderson, Cypress Bay, McArthur, Everglades and Cooper City.

“He’s very passionate about his defense. He knows a lot about football. He’s helped me a lot,” Neko said.

In just his second year at the helm, Bush has shifted Flanagan’s program – which had never made the playoffs before he arrived – into another gear. Being a disciple of Bobby Bowden – major college football’s winningest coach of all-time – has its benefits, as Bush applies what he learned in Tallahassee to what he’s developing in Pembroke Pines.

“Coach Bowden meant the world to me,” said Bush, whose son, Devin Jr., is a junior linebacker on Flanagan’s defense. “He taught us life skills; he taught us accountability. He made us follow a lot of rules so that we’d be used to following rules and that we wouldn’t make excuses for the things that we wanted to do; that we would just put effort into it and set our goals high. I’m so appreciative of Bowden and the program and what it’s done for me.”

Neko hasn’t been a starter this season, but he sees playing time thanks in part to Bush’s defensive strategy of frequently rotating players in and out, something he said he learned while playing for Bowden.

“I try to develop depth and rotate a lot of kids in so that we’re stronger as a team. In case we get an injury we have a kid that can step in and pick up instead of just playing one guy the whole time,” Bush said.

Neko didn’t waste time opening some eyes. He made a solo sack against Stranahan early in the season that showed he could contribute on the line.

“He came in and made some plays right away,” Bush said. “He has some ability and I saw that right away when he stepped on the field. I wish he was a junior.”

Even though his career as a Flanagan football player is for only one season, Neko is grateful to Bush, for it was a memorable one.

“It’s fun playing for coach Bush because he loves all the kids on the team,” Neko said. “He makes the practices fun; he makes the games fun. He’s got his serious times and he’s got his playful times.”