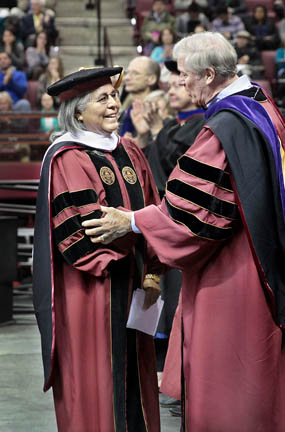 The degrees honor individuals of outstanding achievement who have gained national or international recognition or who have made a significant scholarly, creative, public, business or humane contribution to the country or to FSU, according to the university.

“Being classified in the same group as Betty Mae Jumper is a big honor,” said Gopher, 69. “I was there when both she and Jim Shore got theirs.”

Gopher was cited for advocating education, preserving Tribal culture and traditions, and serving as a devoted friend of FSU. She helped create the university’s course, “History of the Seminoles and Southeastern Tribes, Pre-Contact to Present,” which was first offered in 2006, and she supports the continued use of the Seminole name and symbols.

“We were so pleased to award an honorary degree to Louise Jones Gopher,” wrote FSU President John Thrasher in an email to The Seminole Tribune. “Louise has been a champion of education for the members of the Seminole Tribe of Florida and an ardent friend of the university. Her story of courage and perseverance is inspiring, and I’m glad she was able to share it with our graduating students and their guests during commencement.”

A 1970 graduate of Florida Atlantic University, Gopher was the second Tribal member – after Billy Cypress – and the first Seminole woman to earn a bachelor’s degree. Although she did not attend her own college graduation, she addressed the graduating FSU class of 2014 as commencement speaker after receiving the honorary degree.

“I want students to be introduced to a real Seminole and learn a little more about the Tribe through me,” she said the day before the ceremony at the Donald L. Tucker Civic Center. “We are not fiction; we are real and we’re out there. I hope by me talking to them, they can put a face to the Seminole name.”

She told graduates that education plays an important role in her life because, though her father, Willie Jones, couldn’t speak, read or write English, he made sure his children attended school. She credits him for instilling the value of education in her.

Gopher spoke about growing up in a chickee near Fort Pierce, starting school before she knew how to speak English and being amazed with modern bathroom facilities. Despite the initial obstacles, she succeeded through college and went to work for the Tribe, where she helped develop the cultural education program. The program led to the formation of Pemayetv Emahakv Charter School. She said her focus has always been to retain Seminole culture and keep children in school.

“When you graduated high school, you knew you were going on to college,” said Gopher’s daughter Carla Gopher after the ceremony. “She never said, ‘This is what you’re doing;’ it’s just something we always knew.”

Carla Gopher was the first Seminole to graduate from FSU, class of 1996.

“It wasn’t a question of if you’re going to college; it was where are you going,” added daughter Rita McCabe, who received an associate degree from Indian River State College.

“I was near tears,” McCabe said. “I was thinking about how she stressed education all her life and here she is 60-something years old and still doing it. She is leading by example.”

The year was bookended with other recognitions for Gopher. In January, she was named to the Florida Women’s Hall of Fame. The induction took place in March. In May, she received the Presidential Service Medallion from her alma mater.

Carla Gopher said her mother blazed a path for other Seminole women and children to follow in her footsteps. It will be her legacy, she said.

In 1999, Gopher was included in the Palm Beach Post 100, a list of influential people honored for changing the way Floridians live. In 2007, she received the James D. Westcott Distinguished Service Medal from FSU; she is one of only eight recipients in the school’s history.

McCabe believes her mother inspires many.

“She has lived her life around education and is still continuing to strive to be a better person,” she said. “She always said education is a gold mine that can never be taken away from you.”

Gopher concluded her speech by encouraging the graduates to share their own wisdom, something she has done with the Tribe for decades.

“To those of you who are graduating today, I say treasure your heritage whatever it may be, learn all you can about it and pass your knowledge on to your children,” she said. “We move most confidently into the future when we are grounded in the lessons of the past.”