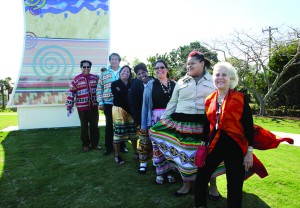 DELRAY BEACH — Delray Beach has never been a Seminole stronghold, but in the 1800s there were a few Seminole camps at nearby Lake Ida. On March 14, Delray Beach city officials cut the ribbon to commemorate the downtown Gateway Art Project, which features Tribal imagery as part of the area’s cultural heritage.

Newman spent time learning Tribal culture, such as how to make patchwork, in the Hollywood and Brighton Culture departments. She used the symbols for lightening, birds and turtles in the permanent installation. During the ribbon-cutting ceremony, Newman recognized and thanked Tribal members for allowing her to learn Seminole culture firsthand.

“From the beginning, she was interested in the designs and our history,” said former Tribal President Joe Dan Osceola. “She is a very talented lady and this is a great contribution to the community. You can see the Seminole influence – it’s very distinct.”

In return for the access she received, Newman offered to teach Tribal women and children silk painting.

“I can show you how to paint your images on silk fabric,” Newman said. “I want to share that with you as my gift. It will be my honor to give something back to the Tribe.”