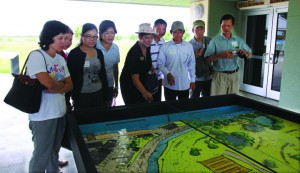 BIG CYPRESS — Portions of the Mekong River Delta in Southeast Asia compare to the Everglades because the resources they offer need protection while supporting a large population nearby. The traditional Seminole way of respecting the environment while inhabiting it is an asset to be shared with other people around the world.

The theme of the trip was sustainable development and regional economic progress, so presentations by the Tribe detailed how to preserve resources such as water, historically significant sites and land by respecting the environment while working the land for profit. Seminole businesses reliant on the land include cattle ranching, citrus farming, chickee building and tourism.

Members of the Tribal Historic Preservation Office (THPO) gave an overview of Tribal history and culture and explained the Tribe’s use of the Big Cypress Preserve. Although the preserve is part of the National Park System, the Tribe enjoys traditional use and occupancy privileges within it.

“A wet swamp is a healthy swamp,” said Pedro Zepeda, traditional arts and outreach coordinator at the Ah-Tah-Thi-Ki Museum. “It has always been our highway. We used canoes to get around and still keep that tradition alive by teaching how to make canoes at the Museum.”

As the Seminole Wars pushed the Tribe further into the Everglades, they created chickees for housing, and the Mekong group learned the traditional and modern role of chickees in Seminole society as living, cooking, storage and gathering places.

“Many [Tribal] members have chickees in their backyards today, which are still used in the traditional way and for ceremonies,” said Paul Backhouse, deputy Tribal Historic Preservation officer. “They are made with natural resources found on the reservations as well as in the preserve.”

Everett Osceola, community outreach coordinator at the Ah-Tah-Thi-Ki Museum, said they lost electricity for about two weeks during Hurricane Wilma and relied on chickees for shelter.

“Everyone stayed in the chickees,” he said. “They kept us cool, dry and together. It was back to the old ways and made us not forget where we came from.”

Archaeology also plays an important role in development on the reservations. THPO has the authority to survey and manage land instead of the state government. The department approves home sites and excavates each one before a home can be built, and if they find something historical, they do not approve the site. Unlike traditional archaeological digs elsewhere in the world, the found artifacts on the reservations are left intact and undisturbed, and another home site is found.

In his presentation to the group, Craig Tepper, director of Environmental Resource Management, explained the water conservation and Everglades restoration activities at the Brighton and Big Cypress reservations. The goal is to establish a sheet flow of water from Lake Okeechobee south to Florida Bay to ensure the survival of Big Cypress and the life it supports. If the water table is high, lightning strikes won’t start fires, which burn vast amounts of acreage.

“Since 1987, the Tribe has had a water rights compact with the state and an agreement with the South Florida Water Management District,” Tepper said. “In 1996, the EPA gave the Tribe the right to set our own water standards. It allows us to regulate ourselves and develop Tribal lands.”

In addition, the Tribe has committed to the Everglades restoration project. Sharing the $60-million cost with the U.S. Army Corps of Engineers, it has created basins underground to store water and pump it where needed. Tepper has also proposed methods to the state on ways to more efficiently move water from Lake Okeechobee without flooding nearby farms.

Members of the Mekong group came away with a positive impression of how the Tribe interacts with the government while maintaining its sovereign rights and environment.

“The cooperation between the government and the Tribe to preserve the resources is interesting,” said Dang Kieu Nhan, deputy director of the Mekong Delta Development Research Institute from Can Tho University in Vietnam. “The education of young people is also important for national parks in developing countries. I am going to try to find funding for an education program for high school students so they can study how important preservation of nature is for the future.”

“Big Cypress is very interesting because of the mission of the park to educating people,” he said. “It is very important that the National Park (System) teaches people how to conserve natural resources.”

By sharing its culture and experience, the Tribe passed along useful knowledge to other countries, where these traditions can be adapted by groups of people half a world away.

“I can bring back information about conservation education,” said Vatthanathavone Inthirath, coordinator of the Rights-LINK Lao project in Laos. “Educating the young generation about conservation is very important. I will share my experience and try to organize a program. I believe my country needs to manage our resources better.”