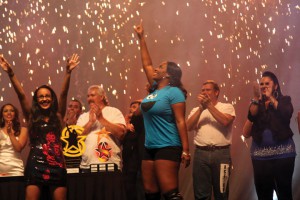 HOLLYWOOD — Seminole Gaming employees watch patrons win big every day, but once a year staff get a chance at a prize that involves more than luck.

Singers, a rap artist and even a magician took the stage on July 30 to vie for the Seminole Superstar title during Gaming’s talent show. Employees from six Florida Seminole Gaming properties competed in the eighth annual event, held at Hollywood Hard Rock Live.

“We come together as one big family,” President Tony Sanchez Jr. said. “These are the people that make it happen for the Tribe.”

Each location held semifinals before sending their first-place winners to the finals in Hollywood.

The overall winner, Hollywood Hard Rock employee Ebone Robinson, took home a $5,000 check for performing a rap she wrote titled “Tha Cypha.” Friend Janyl Torres accompanied her for the opening act. Although Robinson admitted she was nervous to perform for hundreds of attendees, she said it was worth it.

“I can’t even tell you how I feel,” she said after winning the title. “I am extremely excited.”

Although only one contestant took home a prize, the judges – professionally hired “American Idol” look-alikes – agreed that a lot of talent graced the stage.

Also during the event, Tribal brothers Spencer and Zachary “Doc” Battiest and the Las Vegas-based a cappella group Mosaic made guest performances, while Gaming property presidents and general managers danced in a high-energy performance.