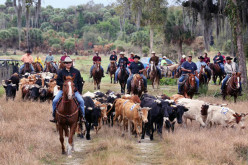 BRIGHTON — About 150 people saddled up and hunkered down Feb. 28 to move 50 cattle from the Brighton marsh pens to the Fred Smith Rodeo Arena for the third annual Smith Family Cattle Drive and Ranch Rodeo.

“We want to keep these guys’ names out there because they did a lot for the Tribe,” said Diane Smith, Roger’s widow.

Jack Sr. also had another son, Paul, who passed away as a teenager, and has four daughters, Mahala Madrigal, Nellie Smith, Oneva Baxley and Linda Tommie.

“If he were here, he’d be right here with us, ready to ride,” Madrigal said. “This was really his life. He’s probably watching us and smiling.”

The family chose Richard Bowers to serve as trail boss of the cattle drive. Bowers said he was honored to lead the way. His relationship with the family dates back to childhood, when he forged a close friendship with Roger.

“Those were the good old days,” Bowers said. “They were carefree days; we just jumped on a horse and went anywhere on the reservation. Our biggest thing was the cattle roundup. We all had cattle. Roger was my favorite friend; we went through a lot together.”

Bowers, as Vice Chairman, and Roger served together on Tribal Council. They both flew to New York in 2007 to ring the bell on the New York Stock Exchange, which Bowers called the highlight of his life. He said the Smith family worked diligently to improve living conditions and cattle ranching in Brighton and helped shape Brighton as it exists today.

“The government took dying cattle from the dust bowl, put them on rail cars and gave them to the Seminoles,” Bowers said. “They wanted us to calm down, be domesticated and have something to do. Some of the Seminoles back then took to it, liked it and went from there. They nursed them and that’s where the herd came from today. The cattle were our casino back then.”

The 6-mile cattle drive began in Jack Jr.’s pasture and continued past the Red Barn to Fred Smith Rodeo Arena. Participants in the cattle drive included mothers on horseback with babies, children of all ages on horses or in vehicles, old-timers who have moved cattle a hundred times and newbies on the trail for the first time.

The crowd carefully navigated the pastures, which were pitted with a profusion of muddy gullies, while working dogs rounded up cattle that strayed from the herd. They stopped momentarily in front of the Red Barn and then took a longer break in a pasture on Harney Pond Road before reaching the arena for a hearty lunch.

The journey took about three hours.

“This is a like a field day for me to participate in something that will be a historical tradition for the Tribe,” Brighton Board Rep. Larry Howard said. “The Smith family had some pioneers in their time and this shows the roots of the family. I enjoy watching everyone come together.”

“The ranch rodeo is for local cowboys and their families,” rodeo director Amos Tiger said. “People come from all around the area and we give them a good show.”