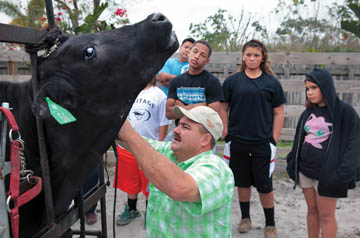 HOLLYWOOD — Hollywood 4-H’ers recently learned that a show ring for steer isn’t much different than a stage for beauty queens.

On Feb. 27, they were taught how to hide an animal’s flaws while accentuating its best attributes during a steer showmanship and grooming clinic at the Hollywood barn. The lesson helped kids prepare for the annual 4-H show and sale held March 27-28 in Brighton.

“Grooming tries to enhance the good parts and hide the others,” said instructor Marvin Hines. “It’s like a woman with big ears who wears her hair long; she makes the most of what nature gave her.”

Dyami Nelson, Maleah Smith and Teijo Smith, the first 4-H’ers to house steer in Hollywood, attended the clinic. Hines taught them how to trim steer to show off its muscle. Each kid received hands-on experience with the clippers.

“There is no right or wrong way to groom,” Hines said. “The judges look at a steer without the head; the body should be a large rectangle.”

Judges look beyond the skin for bone structure, muscle and finish (the line of fat on the top of the back). Steer had to weigh 1,000 pounds to qualify for the Brighton show. Maleah’s steer, her first, weighed 1,074 pounds a month before the event.

“It’s more work than a hog,” said the Hollywood 13-year-old. “I spend more time with it, about two hours a day. I walk it and bathe it.”

A steer needs to walk about a mile every day to build muscles in the hind quarters, but Hines showed the 4-H’ers how to mask a lack of muscle by clipping a line down the hind quarters to create the illusion of width.

Some steer and heifers have their hair fluffed up for the show to mask imperfections. If a cow is more Angus than Brahman, the hair will be longer and easier to fluff, Hines said. The blow dryer, 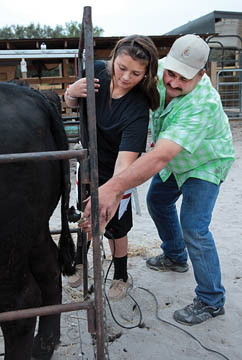 spray dye and oil make hair shine under the lights of the show ring.

To get the cattle in show shape, Hines said steer should be fed either steam rolled oats or whole corn with MoorMan’s Beef-trate pellets to aid digestion.

“It will put on weight in a hurry,” Hines said.

But the show is more than just a bovine beauty pageant; the kids studied for questions they would be asked in the show ring and practiced walking their animals with a halter to prepare for the showmanship aspect of the event.

Hines said showing the animals generates enthusiasm and competition within the show ring and also teaches valuable lessons, including accepting responsibility, winning graciously, losing with dignity and learning the amount of work and determination it takes to become a winner.

Grooming clinics were also held in Big Cypress, Immokalee and Brighton leading up to the Seminole Indian 4-H Livestock Show and Sale.