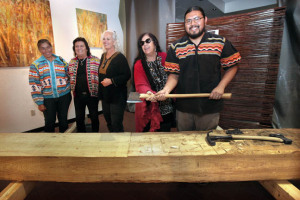 FORT LAUDERDALE — The unveiling Jan. 30 of an 18-inch-thick, 10-foot-long Cypress log at an art studio in downtown Fort Lauderdale launched an art project that will span from the drawing board to reality.

In months to come, in view of passersby of the Upper Room Art Gallery near the New River, Seminole cultural artist Pedro Zepeda will carve, hatchet and sometimes chain saw the hefty tree trunk into an authentic Native American dugout canoe.

The demonstration and creation will be exhibited live at least twice per month until its completion. The project is part of a $30,000 Knight Arts Challenge grant that also funds an upcoming event called Paddle Up, which will feature a Seminole and Miccosukee canoe journey along the nearby Himmarshee Canal, a tributary of the New River.

Both happenings, dubbed the Tribal Arts Project, are tied to a larger neighborhood revitalization effort called Las Olas Village, which aims to bring a stronger indigenous presence to the area while building business opportunities.

Merrill said the Tribal Arts Project was born out of a chance meeting with Zepeda and Everett Osceola, who were then both employees at Ah-Tah-Thi-Ki Museum, during a public demonstration to stop the demolition of the area’s first post office structure near the historic Stranahan House.

Stranahan House, in addition to Riverwalk and Las Olas Riverfront, are located on historic land for Seminole and Miccosukee Tribe members. There, several Seminole War battles were fought before the turn of the 20th century brought peaceful trade between Natives and European settlers.

“We (the CCDF) always deal with environmental, social justice or poverty-related issues. When we met Pedro, Houston and Everett, we saw spiritual elements that bind us all. The sacredness of the water is one of those things,” Merrill said.

Zepeda said the Cypress log used for the canoe carving was recovered from the Big Cypress Reservation in 2011. The estimated 200-year-old tree was felled in 2005 by Hurricane Wilma.

Zepeda, of Naples, said he learned how to carve canoes from a “hodgepodge of learning.”

A graduate of Stetson University, Zepeda learned from stories his grandmother told him about canoe carving; from practical tips from his brother Brian Zepeda, who is a cultural carver and served many roles in Seminole culture teaching and leadership; and from studying canoes at the Ah-Tah-Thi-Ki Museum where he worked for several years as a traditional cultural outreach coordinator.

“I enjoy doing culture and history presentations. For me, carving the canoe while people watch is a living history event. It’s great to carve toys, but I love it when I make traditional sofkee spoons, bows and other functional tools,” Zepeda said.

For dates and times for Tribal Arts Project events, call 954-592-6021 or visit www.UpperRoomArtGallery.com.