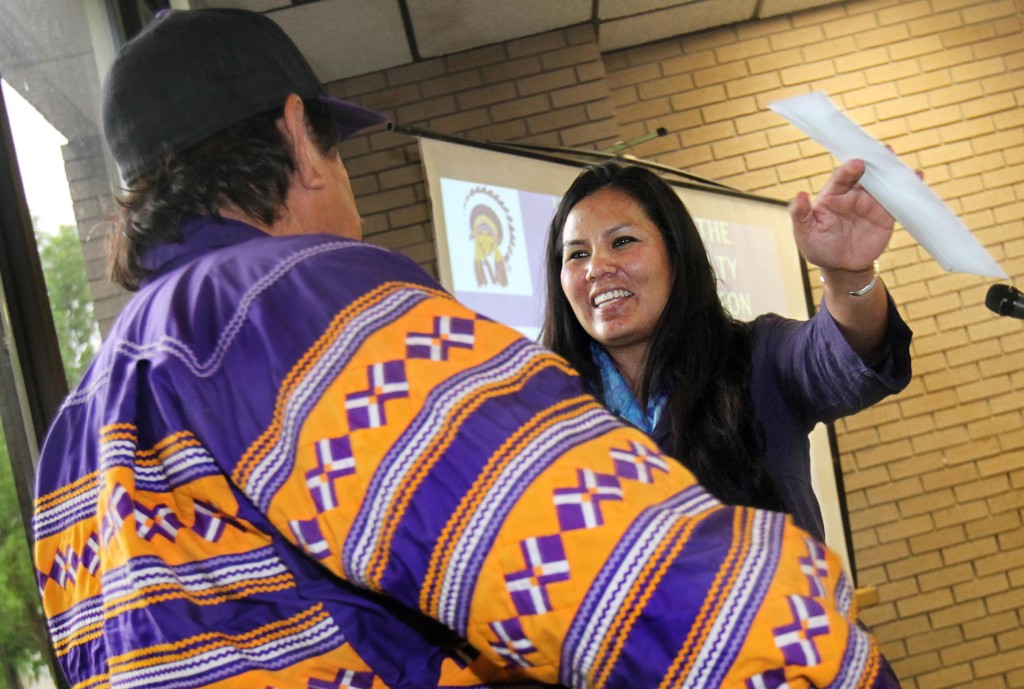 LAWRENCE, Kan. — Football at Haskell Indian Nations University, under severe financial stress, has received an assist from Tribes throughout Indian Country, including a major Hail Mary from the Seminole Tribe of Florida.

On May 7, Tribal members and Haskell alumni Moses Jumper Jr. (1970) and Pete Hahn (2005) presented Haskell Foundation with a $100,000 check to keep the endangered football program alive.

The gift was presented at the campus dining hall during the Lawrence, Kansas university’s annual faculty awards lunch.

“Haskell means a lot to the people of Indian Country. In our Tribe alone we have many people in important roles who have come through Haskell schools … right here, this is the hub, where we meet each other and produce the leaders of Indian Country,” Hahn told the audience, which included teachers, department heads, administrators and school President Venida Chenault.

Mike Tosee, an American Indian Studies teacher at Haskell, who played football for the college with Jumper in the late 1960s, said the gift was among many received from several Tribes in the nick of time. Last year, when the football program was forecast to die at the cash-strapped university, Tosee was charged with resurrecting the near defunct Haskell Foundation with at least $250,000 to keep the program breathing.

The Chickasaw, Creek Nation, Sac and Fox, Citizen Band Potawatomi, Cherokee and Choctaw Tribes also came through with funds and services to help cover the costs of equipment, on-the-road meals, lodging and transportation. Tosee said the Seminole donation put the immediate fundraising goal over the top.

“To us, it means survival,” Tosee said. “The money will go to pay coaches and keep football alive.”

“When we bundle, we stand strong for sovereignty and self-determination for the long term,” Chenault said.

During the luncheon Jumper presented the ninth annual Howard Tiger Memorial Coaching and Teaching Award. Jumper said the honor, named for the Haskell graduate and Seminole leader who created the Seminole Recreation Department, is granted to those whose work encourages success through sports, academics and leadership among Haskell athletes.

“We try to honor those people who make a difference – the ones that stand out and give it all to the students,” Jumper said.

This year’s recipient is fourth-year women’s volleyball coach Nana Allison-Brewer (Navajo), whose team pulled off two upsets in the Midlands Collegiate Athletics Conference tournament last season before being ousted in the semifinals.

“To be able to stand as one of the nine winners so far is humbling to me,” Allison-Brewer said.

She was part of the coaching staff at Arizona in 2006 when the team reached the Elite Eight in the NCAA Tournament.

As a Native American, she remembers what life was like growing up poor, stereotyped and often the subject of racist ridicule in largely white Farmington, New Mexico.

“Sports gave me no boundaries to show my skills and to give an elbow, during competition, to players who usually liked to put me down. That gave me strength to be a role model and to succeed and to create success for others,” Allison-Brewer said.

In 2010, the Howard Tiger award went to Benny Smith (Cherokee), who joined the Haskell faculty in 1971 as a football coach. Before his retirement in 2007 as the director of student counseling, Smith spent decades working with students in track, basketball, the rodeo club and with Native language fluency.

“Receiving the award is recognition; it’s like a hug. And to get it from people you’ve known and worked with for so many years makes it really great,” said Smith, who lives just a few miles from the Haskell campus. “It’s a great testimony to the family atmosphere at the university.”

For the Seminole entourage that traveled to the event, including Haskell graduates Laquita Jumper, Gale Boone and Johnny Boone, the visit was like a homecoming. Other Tribal graduates include Chairman James E. Billie and Brighton Councilman Andrew J. Bowers Jr.

“Haskell is a great place to go to school not just because it’s Native American, but because you make friendships with people that last a lifetime and it produces people who move on to do great things,” Jumper said.