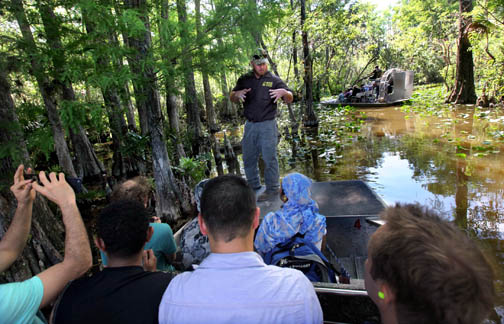 BIG CYPRESS — Big Cypress Board Rep. Joe Frank promised 26 master’s degree and doctoral candidates from nations around the globe one thing during a tour May 22 of the reservation’s wetlands: “You will be amazed when you look at Florida how the environment struggles to survive.”

All hydrology system modeling students deemed the “cream of the crop” from the United Nations’ UNESCO Institute for Water Education in Holland, the students were riveted by the beauty of the Everglades and by the threat of its end.

Part of their curriculum, since 2005 thanks to the Florida Earth Foundation led by executive director Stan Bronson, includes a trip to the United States to study water management models developed by the U.S. Department of the Interior, U.S. Army Corps of Engineers and the South Florida Water Management District.

James Charles, an environmental lawyer with the firm Lewis, Longman & Walker that advocates for the Tribe’s environmental issues, arranged the first time visit to Big Cypress. Charles is the chair of the firm’s Indian and Aboriginal Tribes Industry Group.

“I thought, wouldn’t it be great if they could hear and see how hydrology affects the Tribe, Florida’s indigenous people,” said Charles, a former environmental law adjunct professor. “It’s a chance to see the Tribe’s stake in the matter and it tells a story not normally heard.”

Rep. Frank told the students that the wetlands, steeped in Seminole history, culture and traditions, have been in danger for decades because of the negligence of government agencies who knew little of the land and its habitat. He said the Tribe has been left to contend with keeping water clean and safe for all the reservation’s 50,000 acres and providing clean water downstream.

“It’s getting worse because of a government that won’t even acknowledge climate change; politicians who are facing elections and don’t want to address the problem; and a dysfunctional legislation that hijacks funds and puts the money elsewhere,” he said.

An indicator of climate change is rising seawater levels that in South Florida are causing salt water intrusion from coastal environments into the freshwater Everglades. Birds that once lived in abundance in mangroves that thrive along the coast are now found in Everglades National Park, where a line of struggling marsh prairies and juvenile mangrove is pushing further north. Peat soil levels are also negatively affected, Tiger said.

“The soil was the finest black soil in the state – 3 inches thick. Now it is only 1.5 inches of top soil. It’s scary that it will be gone in 50 years. Humans have done hellacious damage,” Tiger said.

To the students, airboat rides through the river of grass, a trek via swamp buggy through marsh and uplands, and an alligator wrestling demonstration punctuated the dependency of a culture that co-exists and thrives on water – and thus, harm to the Tribe if the water were to dry up.

Bronson said the tour illustrated how the Tribe continues use the environment to survive. Food, shelter, commerce, spiritual beliefs and medicine, all reaped from environment, are fundamental to Seminole life.

“It’s an amazing experience to have the engines of the boat cut off and to sit between the cypress trees. Wow,” said Marianne Scov, of Denmark. “We drove in from very dry land [in West Palm] that lacked water to here, an abundance. I understand now.”

The encounter brought sadness to Mina Hosseinpourtehrani, of the Islamic Republic of Iran, because of the loss of much of her country’s water resources during recent decades of war and political upheaval.

In particular, according to the United Nations Development Programme, Lake Urmia in Iran’s northwest region lost nearly 90 percent of its water volume to “rapid development, unsustainable agriculture and – and to a limited extent – the impact of climate change.”

“Sometimes we have no hope. Now it is Khuzestan [in southwest Iran] that is exposed to danger and damage,” Hosseinpourtehrani said. “I cannot answer what can be done, but I know I want to make better communities.”

Bronson said many of the graduates go on to head important positions in water management in their homelands.

Philip Padi, who attended the inaugural class in 2005, is now a system planning engineer for the Volta River Authority in Ghana. Others hold offices in the ministerial branches of government also tied to environmental concerns.

“It’s hard for our people to maintain our culture and belief system when it is so tied to an endangered environment, but we are grateful for people who are concerned,” Rep. Frank said. “With all the challenges we have, we have opportunities to get it right. We’re just running out of time.”