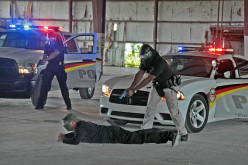 BIG CYPRESS — As sirens blared and lights flashed, two Seminole Police Department officers drew their guns and took down a couple of felony suspects at the old bingo hall Aug. 29 in Big Cypress. Afterward, everyone at the scene discussed the apprehension, although no one was arrested.

The “crime scene” was nothing more than an SPD training class for 15 officers, who honed their skills during the annual training exercise.

Every SPD officer, from the rank of lieutenant and down, must complete at least 40 hours of training each year. They are also required to complete Florida Department of Law Enforcement mandated handgun training twice a year and have the option of earning additional certification on rifles and shotguns.

“We have to make sure the officers are at the highest level of their profession,” SPD Chief of Police William Latchford said. “A football player has to bring his ‘A’ game every time he steps on the field and it takes practice. There is no difference in law enforcement. We need to ensure we all come to work with our ‘A’ game. We provide the top level of training in the state; we have a quality training unit.”

The guns weigh the same as standard weapons to simulate real scenarios.

During the exercises, every officer knew his or her role.

“It’s not an everyday thing you do, so training refreshes your skills,” said Officer Greggory Forsyth, who has served with SPD for nearly two years after a 23-year career with Hollywood Police Department. “It’s helpful because every day there is something new to be learned. You can never have enough training.”

Forsyth said working as a cop in Hollywood was about reacting to crime, while at SPD he works with the community to prevent it.

“SPD is a close-knit department and the community is too. There isn’t a lot of distance between anyone,” Officer Martin Rawls Jr. said. “SPD is community oriented and I want to give them peace of mind and a sense of security.”

As a new recruit, the training exposed him to important situations with new colleagues.

“It was a refresher for some, but it was a useful tool in my work life every day,” Rawls said. “It gave me a better sense of urgency when approaching a situation and a better understanding of how to execute a plan with my colleagues.”

After each exercise, training officer John Huckestein gathered the group to critique the performance.

“The constructive criticism is helpful,” Forsyth said. “There are things you don’t see but other people see during the incident. Training helps you with making decisions and you will react in a safe way.”

“Training was useful, exciting and I’d like to do it again soon,” Rawls added. “Repetition is always the key to great success.”