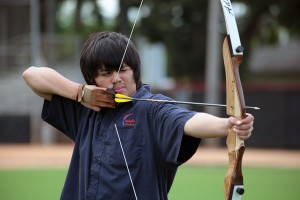 Archery is one of the featured events at next summer’s Indigenous Games in Saskatchewan, Canada, and the Tribe is looking for young archers to compete in the age-old tradition.

The use of bows and arrows in North America dates back to around 2500 B.C. when the first Native Americans crossed the land bridge from Russia to Alaska and ventured south looking for mammoths and buffalo. Years later Indians in Florida, including the Seminoles, used them as survival tools in the Everglades.

“Back in the day, we had to do what we had to do to survive and provide food,” said Paul Buster, Cultural language instructor. “They weren’t weapons; they were tools.”

People used the tools to hunt four-legged animals and fish. Bows were made of local wood and buckskin. Other fibers were used to project the arrows.

Today, bows and arrows are made of modern materials, such as fiberglass and aluminum, and are used for hunting and the sport of archery.

For the Indigenous Games, Seminole team tryouts will be held in Brighton at 10 a.m., Nov. 2 for 19U, 16U and 14U teams. Archers can use either traditional or compound bows.

A compound bow uses about half the pressure of a traditional bow when pulled back to shoot. The cam, or pulley, system takes the weight off the bow once the arrow is drawn back at full length. In addition, accessories such as a sight and stabilizer can be added. A traditional, or recurve, bow has been around for thousands of years.