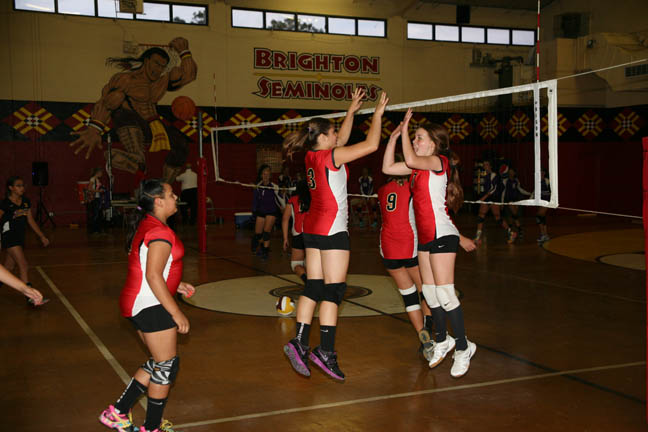 “We are really coming together as a team –  it’s so nice to see,” said head coach Kim Jackson.  “The thing about our team is we have so much more potential.  We could be so much better than we are right now; that’s very exciting.”

On Sept. 19 the Lady Seminoles defeated their rivals the Yearling Middle School Bulls (25-16, 27-25). Leading the team was Aleina Micco who had five aces, or serves the opponent can’t return, and Raeley Matthews with 10 kills, or points off a spike.

Team member Sunni Bearden said she enjoys playing teams on their home court, but she hopes to win against Yearling on their court as well.

“It’s fantastic (to play Yearling); it’s so wild,”  Bearden said. “We are always ready to play them but we are going to try our best to beat them on their home court, too.”

Jackson said the team has some things they need to improve but that they work well together overall.

“We are really a close-knit team; we really don’t have any conflicts,” Jackson said. “They are learning how to rely on each other and know that someone else is going to be behind them.  They are learning trust and reliability.”