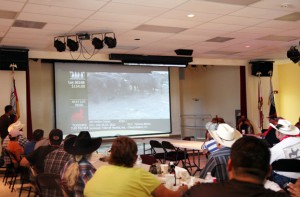 BIG CYPRESS — Seminole cattle owners gathered at the Big Cypress Youth Center on April 20 to gauge prices at the annual cattle sale, and they were not disappointed.

During the live, hour-long video auction, Seminole calves sold for an average of $835 a head, said Alex Johns, assistant director of the Natural Resource Department. The Tribe pulled in about $4 million in sales this year – the Tribe’s most profitable year in its 29-year history selling cattle through live video auctions.

“The calves sold higher than we’ve ever sold them,” Johns said. “We sold them at $100 more a head this year. I’m happy with the turnout.”

Johns said he attributes the success to supply and demand, as well as to repeat customers who like the quality of Seminole cattle. About four years ago, the cattle department made the decision to produce all-natural beef; they no longer use hormones or antibiotics, and they raise their cattle on an open range. Seminole beef currently stands at Choice quality-grade USDA beef.

The result, Johns said, is better quality meat that will sell for more money on the market.

The live video auction, used by the Tribe for cattle sales since 1983, has also played a significant part in the success of its agricultural business, Big Cypress Board Rep. Joe Frank said. That year the Tribe made Native American history as the first to air its cattle on television, making it possible for buyers nationwide to view the Tribe’s cattle up for sale.

“We raise some of the best cattle in the State of Florida,” he said. “It’s one of our first industries. Cattle has been a pretty established tradition in my family. I see it as part of who I am.”

Rep. Frank said the event served as a way for cattle owners from each reservation to meet. For first-time attendee Immokalee Board Liaison Dorothy Scheffler, it also served as a learning experience.

In addition, the event provided an opportunity for the late Roger Smith’s daughters – Trisha Osceola, Amanda Smith, Dana Osceola and Brittany Smith – to commemorate their father. The women gave out camouflage T-shirts and hats that they designed with Roger Smith’s brand.

“We wanted to donate shirts and caps to all the cattle owners because we wanted to give back in his memory,” Trisha said. “We know our dad really loved to tend to his cattle. We always teased him because he tended to them so much.”

“We know we have big shoes to fill,” Trisha said. “But it don’t hurt to try.”