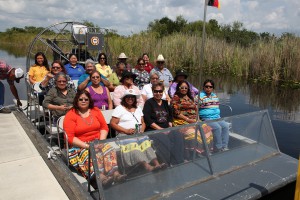 TRAIL — About 15 Tribal seniors from Immokalee, Big Cypress and Trail gathered at the Miccosukee Indian Village on May 9 for fellowship and fun. Many hadn’t visited Trail in years, and old memories surfaced.

A Village staff member gave the seniors a tour of the Village, starting with an explanation of Miccosukee family traditions at the model cooking and eating chickees. Then, they walked down a row of chickees where the seniors saw demonstrations of traditional beading, wood carving and sewing. The path led to the Miccosukee Museum, where they viewed old photographs and watched a video about the importance of Miccosukee culture.

While there, Liaison Huggins pointed out black-and-white photos of his Independent grandfather and uncles from the mid-1900s. He said one thing that makes Trail unique from other reservations is the mix of Independents, Seminoles and Miccosukees; he, like many, has family members in all three categories.

The Village tour ended with a live alligator show, where seniors winced and gasped as the alligator wrestler pulled out all the big tricks. Immokalee Tribal senior Mary Sanchez walked away reminiscing about her days in the pit.

“No one believes me,” President Tony Sanchez Jr.’s mother said, “but I used to wrestle alligators.”

She said she performed at the Native Village in Daytona when she was about 18, although a storm that flooded her chickee years ago destroyed the photographs that proved it.

After the show, seniors bused down the road and took a mid-day airboat ride through the Everglades. The predicted storms kept at bay, and clear skies and sunshine made for a pleasant ride.

“Once upon a time, we used to live out here on these hammocks,” Huggins said as he looked out into the sawgrass-filled abyss. “It’s like coming full circle.”

Immokalee’s Joseph Billie recalled fishing and hunting turtles in those waters maybe 40-50 years ago, and this trip was his first time back since then.

The day wrapped up with a traditional lunch at the Huggins Camp, where Billie enjoyed visiting with his brother Tommie from Clewiston.

For Big Cypress senior Carol Cypress, the meal was a highlight of the gathering. She said she especially enjoyed the boiled squash and bananas. Also on the menu were fried garfish, fried chicken, spam and rice, frybread and sofkee.

President Sanchez visited and offered his greetings, wishing everyone a happy Mother’s Day.

“Sometimes we all get so busy that we take our moms for granted, but on that one day, we really need to take the time to really tell them how much you appreciate them,” he said. “No matter how old you get, you’re always going to be their little son or daughter, and for me, my mom is very special.”