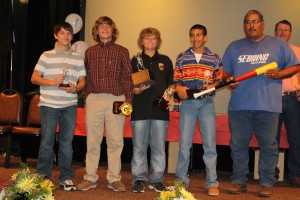 BRIGHTON — Pemayetv Emahakv Charter School recognized their athletes and inducted their honor students during banquets held at the Brighton Veteran’s Building on May 29 and June 6.

On May 29, in a joint ceremony, middle school students were inducted into the National Honor Society and were recognized for their involvement in athletics as well.

To start the awards, the school’s sports director, Chris Goodwin, took to the podium to welcome the guest speaker – one of Seminole Tribe’s own, Jarrid Smith. Goodwin said he chose Smith because of his accomplishments in sports and education.

“I was touched by his morals and values and his overall passion for life,” Goodwin said. “He’s a great role model for the Seminole Tribe.”

Smith spoke to the students about the importance of having a game plan in sports, school and life. He also said that anything is possible with faith and guidance from family, teachers and coaches.

“Follow the game plan of our Creator, and you will be truly following directions,” he said.

Following his speech, the school recognized the new inductees. To be eligible for the Honor Society, students must maintain a GPA of 3.0 or higher; they must also demonstrate five traits: scholarship, service, leadership, character and citizenship.

The students received plaques and pins once inducted and recited the Honor Society pledge. Following inductions, principal Brian Greseth introduced coaches Darryl Allen and Harry Tewksbury to hand out participation awards for sports. Every student who participated received a letter and a certificate.

In addition, the staff handed out the Fellowship of Christian Athletes (FCA) awards. The Charter School’s FCA is a newly organized club sponsored by Goodwin and teacher Crystal Drake. To be eligible, students have to be an athlete and meet on Wednesdays to watch videos and listen to guest speakers.

Nine students also received the Scholar Athlete Awards. To qualify, students maintained a GPA of 3.5 or higher during the season. Students were awarded a patch for the year.

Next, principal Greseth called on student Courtney Gore to give a heartfelt thanks to all of the school’s coaches.

“I have never had such awesome coaches as I had this year,” she said. “I will be forever thankful.”
All coaches were awarded with plaques and thanked for all their hard work and dedication to athletics.

“They don’t make a lot of money,” principal Greseth said. “They do it because they love working with kids, and they have a passion for sports.”

“You can see the importance of family, the commitment to sports, to academics and to faith. What an amazing thing we have going here,” principal Greseth said.

“I am so proud of each and every one of them,” Gran said. “They work hard all year long.”